B-Movie of the Month: Evilspeak 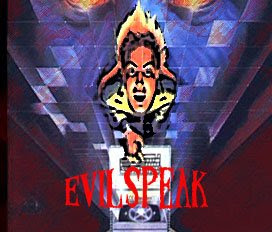 Evilspeak may not be a particularly great film but it is one of the most distinctly of the time features, and contains one of the best revenge reels in 80’s splatstory. Seriously, we have evil piggies of carnivorous doom devouring beautiful women, flying nerds with swords doing a fantastic impersonation of Conan the Barbarian in head splitting excess and great performances that put character into this tale of a sadsack gone satanic. With a computer… a really cheap computer that knows how to put together a black mass.

A simple tale of one put upon nerd named Coopersmith (a perfectly cast Clint Howard) that just can’t get a break from life. Oddly, and most non-nebbish as well, our man wants to play sports more than anything, even if he isn’t so great. This makes his moronic teammates hate him as only the rich and disowned can do. They taunt him using the name Cooperdick, which is funny to me in that at one point as the lead boy brags about his prowess and is put in his place by a girl and they like to strip off Clint’s pants for fun no less. Hmmm…. Anyway, out of the subtext, back to the splat.

Coopersmith just happens to get punishment duty in his private schools chapel basement-which ties into an opening sequence which showed a defrocked priest named Esteban (Richard Moll) decapitating topless women… luckily, the big bad satanic maniac left behind all the tools for a black mass to ensure his return. The battered Coopersmith is the perfect fleshy instrument to open the door to hell of course, and aided by a computer that somehow monitors the black mass process (and even requests blood at one point!)— The Geek Riseth with the powers of a demon, and control over some murderous pigs!

Boobs, blood, more blood, humiliation, the great R.G. Armstrong as a vile janitor that wants to show our man how he "turns a little boy into a little girl" and then more breasts and blood. Yeah, ya gotta have more blood.

A true staple of cable television, Evilspeak is not exactly forgettable to fans of the times when horror films and tax shelters went hand and hand, striding across the cinematic landscape and titillating and shocking viewers with new gory fun every week. While some elements have not aged well, especially the computer angle those same things are charming now. Amidst the gore effects and classic trod upon nerd plotline, Evilspeak has a sense of true nastiness mixed with the skill of making you root for the underdog and cheer each kick to the pricks that keep him down. Considering it’s relatively difficult to find status for years, it’s ripe for re-discovery and enjoyment.

The pacing is a bit casual, but it’s worth waiting for the payoff. Also, there are several elements that were strong to begin with, and now that the bulk of the 80’s horror boom can be evaluated with some hindsight-Evilspeak appears even stronger and more assured. Solid performances from Clint Howard, Joseph Cortese ("assume the position boy"), Richard Moll and R.G. Armstrong are all engaging and involving. The bombastic score cuts the scenes to the (sword) hilt, the nudity is prominent and properly presented (lewdly) and the gore. Oh my… The prosthetics and horror with mirror tricks on show is a great reminder of why the good old fashioned syrup and latex methods worked so well, and still do. No need for geysers of post-production blood, the real fake stuff gushes great.

Gruesome fun for the fans of the film, or anyone who missed out the first time through-you’ll be seeking bloody sacraments to pass around to your friends at the behest of your ColecoVision if you aren’t careful. Watch for the wiggling fetus, that’s one of my favorite moments of the 80’s, brrr…..

The DVD from Anchor Bay US is very sharp in both the picture and sound departments and includes a commentary track with Clint Howard and Eric Weston as well as some nice stills and photos to poke through. The commentary isn’t exactly earth shaking, but appreciative of just what was accomplished with Evilspeak from its creator and principal’s perspective with the occasional funny anecdote. The story of the priest who thought his church was restored was both sad and hilarious at the same time… they fixed it all up and then burnt it back down!

While the Anchor Bay US disc is affordable and nice, the UK edition goes one large extra better-- expanding to two discs to include a pre-release cut of the film, with several sequences restored, though via a lesser print source. While it is mostly dialogue (and an expanded version of "Ms. Heavy Artillery" even)-the footage is not without merit. Some transitions are smoothed over, and Clint Howard’s performance takes on a great bit of shading that isn’t evident in the regular cut of the film. Also, look for one very weird moment with The Sarge that had me shaking (and scratching) my head for an hour! As a bonus some trailers (including Undead and Jim Van Bebber’s Manson Family) are included. The extra money is well spent for splatterhounds on the UK edition.

Exploitation and gore, computers and pigs—Evilspeak speaks volumes about it’s time, and deserves to be elevated into the top tier of classicks from the age of the gore film. Add it to your Halloween shopping list in either flavor, but be sure to pack a baggie of bacon and a barfbag and let loose a cry of Banzai, buckaroos!

Email ThisBlogThis!Share to TwitterShare to FacebookShare to Pinterest
Labels: Evilspeak