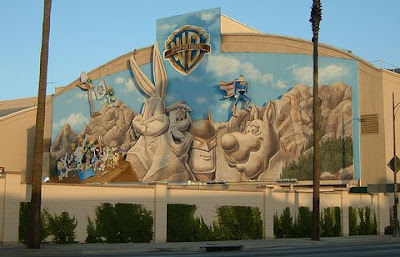 Every studio has them: giant posters (usually of upcoming movies) prominently displayed next to the front gates that serve to stroke the egos of powerful producers, directors or stars. It’s a big deal to get one, particularly at a studio like Warner Brothers, which churns out dozens of films and television shows every year.

So Warner understandably stirred up discussion a couple months ago when it took down the giant vanity billboard dedicated to its animation department and DC Comics. The sign, a three-dimensional version of Mount Rushmore with Bugs Bunny and pals as the presidents, had been in place for 15 years on the north side of Stage 3. Workers began erecting a new one (behind a scrim) around the time that the studio laid off several hundred people, prompting some more talk: If Warner needs to cut costs by laying off the rank and file, why is it spending money re-doing a billboard?

The mural – Warner’s not saying how much it cost – was planned back when the studio was still hot on making a tentpole movie featuring multiple heroes called “Justice League.” A Warner statement said it was time for an update after 15 years, particularly as the studio’s animation strategy has shifted (repeatedly) over that time.

Over 500 people attended the unveiling. Warner served mini-cupcakes and popcorn, handed out free DVDs and rolled out the Mystery Machine and Batmobile for attendees to admire. Some fans came dressed as characters, and Peter Roth, president of Warner Brothers Television, gave a short speech. Bizarrely, Mario Lopez hosted the “festival,” which featured a performance by an all-girl dance team from the 2009 edition of the MTV show “Randy Jackson Presents America’s Best Dance Crew.”
Posted by Robalini at Thursday, April 23, 2009