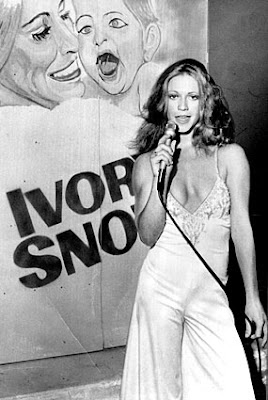 The sad news is that Chambers, to quote the title from a 1974 movie she did not appear in, is 99 and 44/100% dead. The actress was discovered last night in her mobile home in Santa Clarita, near Los Angeles, by her teenage daughter McKenna Taylor, from the last of Chambers' three marriages. An autopsy will be performed; foul play is not suspected.

Turned out the Mitchells, and the customers, got their money's worth. The special kick of Green Door, for the millions of young marrieds and college kids who make it a smash, was the image of a nice young lady submitting to, or demanding, some extravagant sexual attention. The minimal plot has Chambers inducted into a secret sex society, where she is put in a truss and suffers the pleasures of many gentlemen, including one of the first African-American sex-film stars, Johnnie Keyes. The plot could have been a metaphor for the incursion of a sex-film industry, once the entertainment of bordellos and stag parties, into the middle-class movie consciousness.

Green Door had just a little more going for it than notoriety. The Mitchell brothers shared the artistic ambitions or pretensions of the era's porn-auteurs. Except for a narrative framing device, the film has almost no dialogue. Chambers' mass seduction scene is accompanied only by the sounds of heavy breathing, moans and the occasional audible wince. One of the film's money shots gets an instant replay in slo-mo, then in super slo-mo and finally in psychedelic greens and pinks. The last two minutes are extraordinary for a porn film: one extended closeup of a man's and a woman's faces as they kiss (and have sex). It was as if the Mitchells understood Ingmar Bergman's dictum that "Film begins with the human face."

Cue Chambers' 15 mins. of white-hot celebrity. She did the TV talk shows. Warner Books published her autobiography, Marilyn Chambers: My Story. At the New School for Social Research she was a guest speaker at the first session of its new course, "Pornography Uncovered, Eroticism Exposed." She had done a tiny role in the 1970 Barbra Streisand comedy The Owl and the Pussycat; now, with her manager-husband, Chuck Trayner (who had earlier promoted, married and misused Lovelace), she planned her next big step: breaking into mainstream films.

She landed in a Canadian backwater with the young David Cronenberg, then near the start of an exemplarily transgressive career writing and directing meta-horror movies (Shivers, Scanners, The Fly, Naked Lunch) about the body as the ultimate toxic agent. The project was the 1977 Rabid, in which Chambers plays Rose, a car-crash victim who undergoes surgery that forces her to feed on human blood; soon she has infected most of Toronto. The notion of a blond-angel porn star as the carrier of a fatal disease seemed misanthropic science fiction then. Within a few years, the festering of AIDS would ravage the world and decimate the sex-film community.

Cronenberg hired Chambers on the advice of his producer, Ivan Reitman, who rightly figured her name would help sell the picture in foreign markets. If she wasn't quite as convincing as Cronenberg's first choice, Sissy Spacek (who at the time was making her breakout film, Carrie), she's a compelling, scary and often sympathetic presence. In the 1992 interview book Cronenberg on Cronenberg, the director described Chambers as "very shrewd and sharp," and she she "invented her own version of Method acting. When she had to cry it wasn't a problem, because Chuck would say, 'Remember when Fluffy died? — that was her cat — and then she'd cry. I thought she really had talent, and expected her to go on and do other straight movies. But she went back. I don't know whether it was Chuck, or that the industry wouldn't accept her."

I knew about this model actress who was dead at 56. I am knowing about her biography and how she had started her career from the bad movies. Whatever she was looking gorgeous.

Wonderful article! That is the type of information that should be shared around the web.
Disgrace on Google for no longer positioning this post upper!
Come on over and consult with my site . Thanks =)