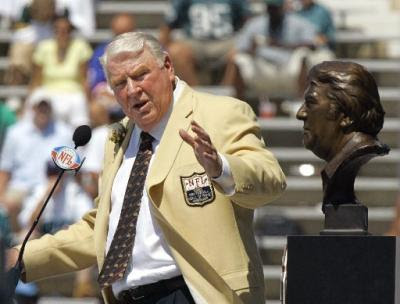 John Madden, an NFL Hall of Fame coach and one of the most popular broadcasters of the sport, has retired from television broadcasting.

In a statement posted on the nbcsports,msnbc.com Web Site, Madden said: "It's time. I'm 73 years old. My 50th wedding anniversary is this fall. I have two great sons and their families and my five grandchildren are at an age now when they know when I'm home and, more importantly, when I'm not..."

Madden, a former coach of the Oakland Raiders, lives in the East Bay.

In his regular daily 8:15 a.m. interview with KCBS radio — which he left up in the air whether he would continue — Madden said that this was a "big day. A big day.''

"I decided to retire,'' Madden said on the air. "I can't even say it. It's tough. Not because I'm not sure it's the right time. But I'm going to miss everything about it because I loved it so much.'' He has been working for the past three seasons on NBC's Sunday night NFL game. His last telecast was the Super Bowl between Arizona and Pittsburgh.

Madden, who, in his typical self-deprecating style referred to himself a young "doofus'' from Daly City, said when he reached the age of 70, he knew he'd have to hang up his hat at some point. He said he's been thinking about retiring for the last three years, but wasn't ready to stop broadcasting NFL football games until just recently. He said each time he's thought about retiring, he'd spend two months mulling it over.

"I vacillated,'' Madden said. "Finally, I was up against it. Two months was running out. The NFL schedule was coming out. This is what I'm going to do.''

In his emotion-laden remarks, Madden noted that the upcoming football season will be the first he won't participate in since his freshman year in high school.

Since he retired from coaching in 1979, Madden has worked as an analyst for all four broadcast networks. His "Madden NFL Football" is the top-selling sports video game of all time.

Madden is reluctant to fly and traveled to games in a specially equipped bus. He told KCBS listeners that he wouldn't stop traveling, "doing things'' and checking out odd restaurants, like "Chewy's,'' as he's known for telling tales about life in general, in addition to talking sports.

Madden mentioned his family as a big reason for stepping down.

His 50th wedding anniversary is coming up in December — prime football season when he'd typically be on the road. And his grandchildren —his oldest, Sam is 8 — are now old enough to know "when I'm not around,'' Madden said.

"You add up everything and it's the right time,'' he said. "There is nothing wrong with me. Nothing. But at some point, you know you've got to do this. The thing that makes it so hard is that I enjoyed it so damn much. That's why it took me so long.''
Posted by Robalini at Thursday, April 23, 2009