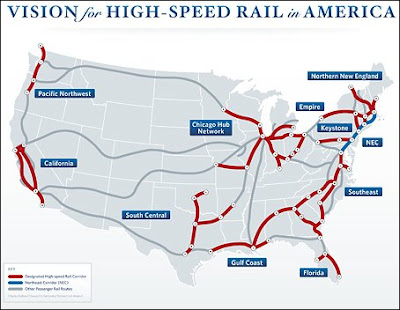 Robalini's Note: Why isn't Obama using this plan as a way to keep workers of GM, Chrysler & Ford still employed rather than the massive layoffs and pay cuts he's pushing for?

Declaring that America should "make no little plans," President Obama declared his intention to build a nationwide system of high-speed rail lines in some of the country's most populated corridors.

Speaking at the Old Executive Office Building before a trip to Mexico and Trinidad this morning, Obama said there is no reason why the most modern transportation systems should be built in other countries.

"A major new high-speed rail line will generate many thousands of construction jobs over several years, as well as permanent jobs for rail employees and increased economic activity in the destinations these trains serve," Obama said in prepared remarks. "High-speed rail is long-overdue, and this plan lets American travelers know that they are not doomed to a future of long lines at the airports or jammed cars on the highways."

The declaration of support for rail did not include any new proposals or money. Rather, it was a restatement of the initiative he launched in the past several months.

The stimulus package that Obama pushed through Congress includes $8 billion that the president said will be doled out to the most deserving projects. He has requested another $5 billion in his budget.

Obama said that the money would be used for two things: to improve existing rail lines so that trains on them could go 100 mph or faster; and to identify and construct new rail lines in major corridors.

Among those, according to a fact sheet put out by the White House are the following:

In his remarks this morning, Obama confronted critics who say the plans are too expensive, don't go far enough, or will shift resources away from the roads and airports.

He dismissed all those concerns. He said the money is needed now to put people to work and will serve as an investment for later years. He acknowledged that more money will be needed but said the billions committed now are a downpayment to get the program started. And he noted that there are billions more in the stimulus package for road and airport improvement.
Posted by Robalini at Thursday, April 23, 2009