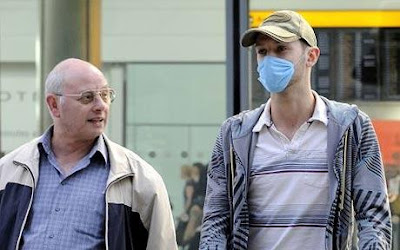 Swine flu: Mexico City becomes 'strange zombie city' as residents hide behind doors
The normally bustling streets of Mexico City were virtually empty yesterday, with millions preferring to stay in their houses rather than risk contagion from the killer swine flu.
By Ioan Grillo in Mexico City
26 Apr 2009

A mixture of fear, suspicion and frustration set in across the country as the death toll from swine flu rose and the government took an increasingly tough position to stop it spreading.

Many of those who did venture out wore the blue face masks that were being handed out by soldiers at check points along the main avenues.

New Zealand students 'highly likely' to have swine flu "It's like we're in a strange zombie movie or something," said Gerardo Garcia, a 23 year old student, hurriedly stocking up with groceries.

"You don't know who could be carrying this plague so it is best to just keep behind closed doors as much as possible."

A shutdown of all schools, universities, museums and theatres was extended to bars and discos, which the government decreed they could forcibly close if they did not shutter their doors voluntarily.

Sunday Masses normally celebrated by millions in this strongly Roman Catholic country were also cancelled - the first such closure since Mexico's religious wars of the 1920s.

Health workers on the ground were overwhelmed with people reporting the key symptoms of the epidemic such as coughs, aching muscles and diarrhoea - although many may have had traditional forms of flu.

In total, 1,300 people were fighting the virus in hospital beds across Mexico with as many as 81 people dying of the disease.

Feelings of anxiety also swept through the 1,000 strong British expatriate community in the city.

Bar owner Umair Khan, 35, of Wembley, London, said he was getting increasingly worried seeing how events were developing.

"Originally, I wasn't in a major panic. But now that everything is shutting down it shows how serious it is," Khan said. "I have been here for 11 years and I have never seen anything like this."

Mr Khan said he shut his business - A British-style pub called the Black Horse - on Saturday after the government decree.

"It's a loss of money but you can't be angry about it," he said. "The last thing I would want is for someone to die after getting sick in my bar."

School teacher Gavin Judd, 38, from Birmingham has also been given a holiday from work.

"My plans are to avoid to going out as much as possible," he said. "If this is serious enough for the government to shut my school then I think it is a very real threat."

Mr Judd said he had no immediate plans to leave Mexico City, but said he will go if the government continues the school shut down until the end of the summer.

However, some others were taking the threat less seriously.

Hugh Carroll, a 56 year old investment broker from Glasgow, said he was unconcerned about the virus.

"I'm not worried in the slightest. It's probably been over exaggerated," he said. "Most people here don't trust what the Mexican government say and I don't believe them either."

Mr Carroll said he had not heard the declarations from the World Health Organization. He planned to go out and meet friends as usual.

Some Mexicans shared this disbelief, alleging it could be some kind of government conspiracy.

"It's probably all just made up to keep our minds off the global recession," said Roberto Santino, a 60-year-old building site foremen.

"Our government has been using these tactics for years."

Mr Santino claimed new government powers to fight the virus - including the power to search suspects and houses - were just an excuse to trample on people's rights.

Another conspiracy theory was that warring drug cartels, who killed eight civilians in a grenade attack in September, could be behind the misery.

At the Santiago Acahualtepec public clinic in Mexico City's working class Iztapalapa neighbourhood, a queue of patients, mostly clad in face masks, packed out the waiting room and stretched into the street.

"My daughter started showing signs of the sickness overnight - her temperature has shot up and she has been in a lot of pain," said Maria Angeles Garcia, a 33-year old teacher, waiting anxiously to be seen. "I am just praying that she does not have this plague."
Posted by Robalini at Thursday, April 30, 2009