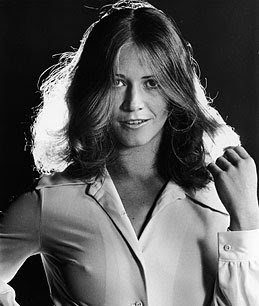 Adult film actress Marilyn Chambers, the onetime Ivory Snow model who gained greater fame as the star of the X-rated "Behind the Green Door," was found dead Sunday by her teenage daughter at her home in Southern California. She was 56.

Authorities have not released a cause of death.

"That wasn't from any personal knowledge. That was all part of the allure of San Francisco," Brown said Monday. "At the time that she was doing what she was doing, it created an interest nationally if not internationally in our city. And people would come here to see if Marilyn Chambers was really dressed in snowflakes."

The snowflakes reference goes back to her debut as a teenage model for Ivory Snow, which featured her on a laundry detergent box as a young mother cuddling a laughing baby. According to journalist Warren Hinckle, chronicler of the Mitchell Brothers era, she grew up in Connecticut as the daughter of an ad executive. "She went to all the right schools and was doing all the right things," Hinckle said.

At age 18, she had made her way to San Francisco and answered an ad placed by the Mitchells, who were making films to show in their movie theater. "Behind the Green Door," released in 1972, was one of the first adult movies with a plot, of sorts. In their promotions, the Mitchells didn't mind that their star had a previous affiliation with the cleansing powers of soap.

"Without this Ivory Snow thing, they might have stayed with these small-time performers," said Rita Benton, marketing director for the Mitchell Brothers O'Farrell Theatre. "It hit all the major news media in 1973. Then they promoted the movie as 'starring Marilyn Chambers, 99.44% pure.' That's what the Ivory Snow line used to be."

Ms. Chambers never lived full time in the Bay Area and was never a regular performer in the Mitchell Brothers O'Farrell Theatre, which started live shows in 1976. She would come back for guest performances over the years. Most famously was during the administration of Mayor Dianne Feinstein, who seemed to have it in for the Mitchells. In what some described as a publicity stunt, the brothers invited Ms. Chambers, then 32, to travel north from her home and help raise morale.

Ms. Chambers did as she was asked on a February night in 1985, undressing and taking an "undulating stroll through an appreciative audience," according to a Chronicle report, an audience that included five undercover police officers. In all, it took 13 officers to make the arrest. "The force ... that took me to jail was appalling," said Ms. Chambers, who then expressed concern that she wouldn't know how to tell her mother she had been detained. "She just got over the X-rated films," she said.

A few years ago, Ms. Chambers made her last appearance at the Mitchell theater during a tribute to her. The place was packed, recalled Hinckle, who was there and got a photo of Ms. Chambers with his basset hound, Melman.

She was married and divorced three times, according to the Associated Press, and is survived by her daughter, McKenna Marie Taylor; her brother, Bill Briggs; and her sister, Jann Smith.

This article appeared on page B - 4 of the San Francisco Chronicle
Posted by Robalini at Thursday, April 23, 2009