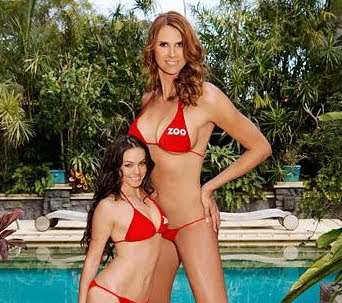 A model named Amazon Eve recently appeared in the Australian magazine Zoo Weekly. She has a beautiful face and figure, but it's her height that makes her stand out the most. According to Eve's MySpace page, the American model is 6' 8'' and 30 years old. In her Zoo Weekly photo shoot, high heels make her look even taller. She towers over a fellow model in her Zoo spread. The shorter woman's head barely reaches Eve's chest.
Posted by Robalini at Friday, December 04, 2009

Email ThisBlogThis!Share to TwitterShare to FacebookShare to Pinterest
Labels: Amazon

It was certainly interesting for me to read the article. Thanx for it. I like such topics and everything connected to this matter. I definitely want to read more soon.