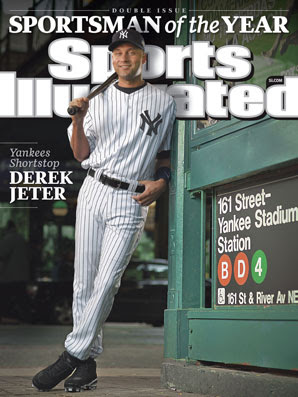 http://sportsillustrated.cnn.com/2009/magazine/specials/sportsman/2009/11/25/derek.jeter/index.html
Monday November 30, 2009
SI names Derek Jeter 2009 Sportsman of the Year
Story Highlights
Jeter is the 56th honoree and the first Yankee to be named SI's Sportsman
In 2009 he led the Yankees to their fifth World Series title in his 14 full seasons
He also passed Lou Gehrig's franchise mark for hits, which now stands at 2,747

NEW YORK (SI.com) -- In what has already been a banner year for Derek Jeter, the New York Yankees shortstop can add another honor: Sports Illustrated's Sportsman of the Year award. Jeter was chosen as the magazine's 56th honoree (the Dec. 7 issue will hit newsstands on Wednesday) and becomes the first Yankee to be named SI's Sportsman.

Jeter's selection caps another outstanding season for the 35-year-old team captain and future Hall of Famer. In 2009 he batted .334 while leading the Yankees to their fifth World Series title in his 14 full seasons, their first since 2000 and their record 27th in franchise history. On Sept. 11 he passed Lou Gehrig's franchise mark for base hits, which now stands at 2,747. In 2009 Jeter led the American League by reaching base 289 times, finished second in the league in hits (212), third in batting average and on-base percentage (.406), fourth in runs (107) and eighth in stolen bases (30). He was named an All-Star for the 10th time, including the sixth time as a starter, while winning his fourth AL Silver Slugger as the best hitting shortstop in the league and his fourth Gold Glove as the league's top defensive shortstop.

In 15 postseason games Jeter lived up to his reputation as a clutch player, batting .344 with a .432 on-base percentage, three home runs and six RBIs. He batted .407 in the World Series to lead the Yankees to a six-game victory over the defending world champion Philadelphia Phillies. During the Series, Jeter was named the American League recipient of the Hank Aaron Award, given to the best hitter in each league, and the winner of the Roberto Clemente Award, given to the player who best displays skill on the field while giving back to the community off it.

It was that combination of on- and off-field achievement that helped make Jeter this year's Sportsman. Said Sports Illustrated Group Editor Terry McDonell, "Derek Jeter has always presented himself with class; he does numerous good works for the community with his Turn 2 Foundation, which is one of the most efficient, effective foundations of its kind; and he's extremely generous with not just his money but with his time, which in many cases is more valuable. He also had another signature year on the field."

Jeter is the first baseball player to win the award solo since Cal Ripken Jr. in 1995. Mark McGwire and Sammy Sosa were co-winners in 1998, as were Randy Johnson and Curt Schilling in 2001. The Boston Red Sox won as a team in 2004.

It will be great to watch World Series: Philadelphia Phillies, i have bought tickets from
http://ticketfront.com/event/World_Series_Philadelphia_Phillies-tickets looking forward to it.