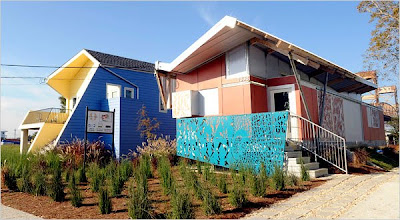 AL ANDREWS, who lives on Tennessee Street in the Lower Ninth Ward of New Orleans, said he didn’t mind the tour buses coming through his neighborhood, but he wished the visitors “would give some of what they pay to the community.” Mr. Andrews lives in one of the brightly colored, modernist houses rising on a small patch of the Lower Ninth, four years after it was devastated by Hurricane Katrina.

In 2007, frustrated by the slow pace of rebuilding in the Lower Ninth, Brad Pitt set up a foundation called Make It Right; the foundation then commissioned 13 architecture firms to design affordable, green houses. The organization plans to build 150 homes, all for returning Lower Ninth residents. So far, just 15 of them are occupied, but those 15 make a big impression.

Indeed, from the main route into the Lower Ninth, the Claiborne Avenue Bridge, it’s impossible to miss the Brad Pitt Houses, as everyone here calls them. They are sprawling, angular buildings in bold hues not usually seen outside a gelateria. Monuments to the city’s resilience, and to Hollywood’s big heart, they are also New Orleans’s newest tourist attraction.

Tour buses, including those of Cajun Encounters (504-834-1770; www.cajunencounters.com) and Gray Line (504-587-0709; www.graylineneworleans.com), pass by the houses but don’t stop to let passengers walk around. You can also take a taxi the five miles or so from the city’s center to the Lower Ninth; the round-trip fare is under $30. (Virginia Miller, a spokeswoman for Make It Right, said the organization may eventually offer tours, but “right now the priority is getting residents settled.”)

I drove a rental car, following MapQuest directions, to the intersection of Tennessee and North Galvez Streets, near the heart of the new enclave. I found that residents like Mr. Andrews and his neighbor, Gertrude LeBlanc, were happy to converse. “If we don’t talk,” Ms. LeBlanc, a cheerful septuagenarian, said, “how will people know what happened to us?”

During my previous trip to the Lower Ninth four years ago, I mainly saw devastation. Wrecked houses were everywhere. Now much of the debris has been cleared, and acre after acre has gone back to nature, with grass almost as high as the reconstructed levees. The main effect in much of the district is an eerie stillness.

But “Brad Pitt’s neighborhood” is a beehive of activity, with builders and landscapers vastly outnumbering residents. A sign in front of each of the houses gives the name and city of its architect. One, called the Float House, was designed by the Pritzker Prize-winner Thom Mayne of Los Angeles. The main part of the house is built to rise with surging flood waters, on pylons that keep it from coming loose. It’s difficult to see the innovative foundation, but unusual external features are easy to spot, such as a kind of trellis cut into intricate patterns and painted turquoise, set against the raspberry-hued building.

Nearby, an angular house by GRAFT, a multinational architecture firm, features a porch enclosure that looks as though it had been cracked open by a storm, an unfortunate visual resonance. A house by the Japanese architect Shigeru Ban has a private courtyard space between the living room and bedrooms, but none of the detailing that would make it feel like a part of New Orleans.

Indeed, the houses seem better suited to an exhibition of avant-garde architecture than to a neighborhood struggling to recover. A number of designers I talked to, some of whom had visited the neighborhood, lamented the absence of familiar forms that would have comforted returning residents.

James Dart, a Manhattan-based architect who was born and raised in New Orleans, described the houses as “alien, sometimes even insulting,” adding, “the biggest problem is that they are not grounded in the history of New Orleans architecture.” But, like other architects I spoke to, he expressed admiration for Mr. Pitt. “He deserves a great deal of credit,” Mr. Dart said, adding that Mr. Pitt had “done more for New Orleans” than any government agency.

Jennifer Pearl, a broker who has several houses for sale in the Lower Ninth, has a practical view. “Brad has the very best intentions,” she said. “However, had he come here with houses that looked like what had been here before, he probably could have had four times, five times as many houses up by now.”

Another issue with the houses (except for Mr. Mayne’s) is their elevation: to protect them from future floods, they have been built on stilts that turn their front porches into catwalks. The goal of porches is to create a sense of community, and that’s hard to do when neighbors and passersby are literally overshadowed.

“It’s like New York — you know, the skyscrapers,” said Ms. LeBlanc, who lives in a single-story house next to one of the much larger Make It Right creations, like a Mini Cooper boxed in by SUVs. “And there are going to be more,” she added.

To most residents, the construction is simply good news. “It’s hard living here now, but it’s going to be worth it,” said Melba Leggett-Barnes, a cafeteria worker, who is concerned about crime in the neighborhood. The lack of commercial activity is also disappointing. “We used to be able to go to the corner store,” she said. “Now we don’t have a grocery; we don’t have a laundry.”

Ms. Leggett-Barnes, whose house was designed by the Philadelphia firm KieranTimberlake, is — literally — the poster child for Make It Right; her image, plastered on bus-shelter signs around the city, urges former residents to return to the neighborhood.

“There may be people who want to move back,” she said, “but don’t know that it’s possible.”

Some visitors also make a stop at the other end of the Lower Ninth, on Andry Street, where three houses built by Global Green (another Brad Pitt-supported charity) stand bright and inviting — and unoccupied. The houses, by Andrew Kotchen and Matthew Berman of Workshop/APD in New York, are listed for $175,000. (One of them is open to visitors; Monday and Friday, 11 a.m. to 4 p.m.; Saturday, 10 a.m. to 1 p.m.; or call 504-525-2121 for an appointment.)

Unlike the Make It Right houses, which are reserved for returning residents of the Lower Ninth, the Global Greens are available to anyone. “We’d love it if you’d buy one,” Ms. Pearl said, a hopeful lilt in her voice.
Posted by Robalini at Thursday, December 10, 2009