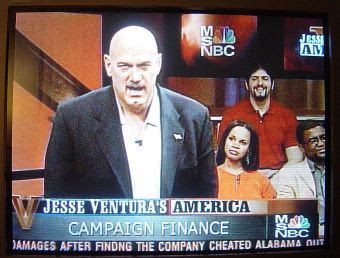 MSNBC Cancelled Jesse Ventura For His Opposition To War In Iraq
Veteran has a bet that his new show will be pulled at the last minute
Steve Watson,
Infowars.net
Monday, Nov 30, 2009

Former Minnesota Governor Jesse Ventura has revealed that he was effectively silenced for three years by MSNBC when the network cancelled his show in 2003 after learning that Ventura opposed the war in Iraq.

The show was originally planned to run five nights a week, but MSNBC executives suddenly changed their minds and it was only broadcast once a week, on Saturdays, before being ditched altogether.

The ex-Navy SEAL has now told the LA Times that he was forced out of the network and prevented from appearing on any other cable TV or news shows.

“It was awful. I was basically silenced.” Ventura comments in the interview.

“When I came out of office, I was the hottest commodity out there. There was a bidding war between CNN, Fox and MSNBC to get my services. MSNBC ultimately won. I was being groomed for a five day-a-week TV show by them. Then, all of a sudden, weird phone calls started happening: ‘Is it true Jesse doesn’t support the war in Iraq?’”

“My contract said I couldn’t do any other cable TV or any news shows, and they honored and paid it for the duration of it. So in essence I had my silence purchased. Why do you think you didn’t hear from me for three years? I was under contract. They wouldn’t even use me as a consultant!” Ventura continues.

“When you live in Mexico, your houses all have names. I almost named my house Casa MSNBC because they bought it. I was paid like a professional athlete, and I got very wealthy. For doing nothing.”

Ventura also states that he has a gentleman’s bet that his new show Conspiracy Theory scheduled to air on Tru TV soon, will never see the light of day, a fact he first revealed on the Alex Jones show last week.
Posted by Robalini at Friday, December 04, 2009