Hamster Toy Has Holiday Shoppers Hot On Its Tail 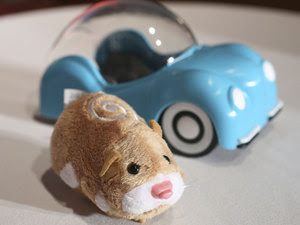 Hamster Toy Has Holiday Shoppers Hot On Its Tail
by Wendy Kaufman
December 3, 2009

This season's hot new toy is a tiny robotic hamster, known as the Zhu Zhu. The Zhu Zhu Pets hamster squeaks, squeals and roams around, and it's almost impossible to find on retail shelves.

The pets, which sell in stores for about $10, are now being offered on Internet sites like eBay for as much as $50 each.

"They are really cute when they bump into stuff and make noises, and you just have to laugh," says Amanda Atkinson, whose younger sister has two Zhu Zhu Pets. But the 15-year-old Arizona teen adds: "They are annoying because they make noises, and they never shut up unless you turn them off. It's a lot of technology packed into a potato-sized package."

The pets have names like Pipsqueak, a white hamster with giant ears; and Chunk, who's really fat. The company also produces accessories like playhouses for the hamsters to roam in.

"They have little beds, and they come with little blankets that are really soft," says 11-year-old Arielle Atkinson.

The toys are made in China for a new company called Cepia LLC, which is headed by Russell Hornsby, a longtime toy industry executive. The company won't disclose precisely how many Zhu Zhu hamsters it has sold so far, but says it expects to sell 6 million to 10 million by the end of the year.

Tim Walsh, author of Timeless Toys, calls the number impressive. But he says Zhu Zhu Pets are not yet in the megahit toy category — one that includes the hula hoop, Rubik's Cube, Cabbage Patch Kids, Beanie Babies and Trivial Pursuit.

Some of those toys sold for premium prices when demand exceeded supply. And the same thing is happening now with the robotic hamsters.

Neither Cepia nor retailers were prepared for the hamster craze. Cliff Annicelli, editor-in-chief of Playthings magazine, which covers the toy industry, says most of the major retailers placed only modest initial orders. And in this cautious environment, Cepia limited production to match those orders.

"You wind up with just enough to meet your anticipated demand, but not enough if demand goes way past where you thought it would be," says Annicelli. "And with Zhu Zhu Pets, I think it was certainly the case where demand went way past where anyone anticipated."
Posted by Robalini at Friday, December 11, 2009