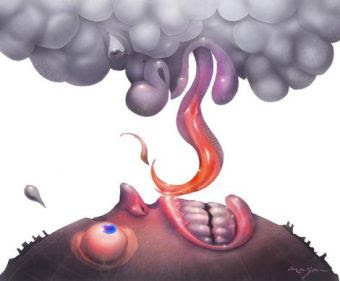 The leaking of thousands of emails from the University of East Anglia’s Climate Research Unit has shined a light on an industry of climate change alarmism, highlighting the hypocritical claims of corporate cronyism on behalf of proponents of the anthropological global warming theory (AGW).

A common accusation made by AGW theorists, or “the consensus” as they like to be known, is that dissenting groups are only interested in the financial kickbacks they can secure from big oil companies.

For example, in 2008, ExxonMobil donated around $7 million, less then 0.01% of it’s annual profits, to a selection of think tanks and institutes. Among these donations was a combined $125,000 to the National Center for Policy Analysis and the Heritage Institute, right of centre public policy groups that have questioned the “consensus” on climate change.

The NCPA website states: “NCPA scholars believe that while the causes and consequences of the earth’s current warming trend is still unknown, the cost of actions to substantially reduce CO2 emissions would be quite high and result in economic decline, accelerated environmental destruction, and do little or nothing to prevent global warming regardless of its cause.”

The London Guardian and other left leaning mainstream media outlets have pounced on Exxon’s small donations to such groups, reporting it as detestable corporate funding of “climate change denial”.

However, when it comes to the funding of AGW proponents, the figures are infinitely greater, many of the sources take their money directly from our pockets, and yet the Guardian and its ilk, conveniently, remain completely silent.

The leaked emails from the Hadley centre reveal that (now former) CRU chief Phil Jones has received 55 endowments since 1990 from agencies ranging from the U.S. Department of Energy to NATO, worth a total of £13,718,547, or approximately $22.6 million.

Massaging the scientific data, hiding a decline in temperatures, hijacking the peer-review system and blackballing dissenting scientific opinion does not look good for Jones in the context of such financial gain.

Another document leaked from the CRU, titled potential-funding.doc, lists sources of potential funding and shows that the scientists considered pressing “energy agencies” that specifically deal in new technology to reduce carbon emissions.

Three agencies listed as potential sources of funding are UK based Carbon Trust, the Northern Energy Initiative, and the Energy Saving Trust. Renewables North West, an American company promoting the expansion of solar, wind, and geothermal energy, is listed as a fourth potential benefactor.

Of course, all these potential financial backers have a vested interest in maintaining the conception that human-induced global warming is a reality backed by science.

In an article entitled Climategate: Follow the Money, columnist Bret Stephens at the Wall Street Journal points out that the funding of climate skeptics is a drop in the ocean compared to the huge industry that human-driven climate change science has spawned.

“The European Commission’s most recent appropriation for climate research comes to nearly $3 billion, and that’s not counting funds from the EU’s member governments. In the U.S., the House intends to spend $1.3 billion on NASA’s climate efforts, $400 million on NOAA’s, and another $300 million for the National Science Foundation. American states also have a piece of the action, with California—apparently not feeling bankrupt enough—devoting $600 million to their own climate initiative. In Australia, alarmists have their own Department of Climate Change at their funding disposal.” Stephens writes.

“And all this is only a fraction of the $94 billion that HSBC estimates has been spent globally this year on what it calls ‘green stimulus’—largely ethanol and other alternative energy schemes—of the kind from which Al Gore and his partners at Kleiner Perkins hope to profit handsomely.”

Billions of dollars in grants for one research institute or university does not go unnoticed by the rest, and there is a valid point to be considered in the notion that this is where the “scientific consensus” has it’s roots.

“Today these groups form a kind of ecosystem of their own.” comments Stephens.

Al Gore, the first carbon billionaire, has proven that he is only interested in solutions to environmental problems that line his pockets. The industry beneath him depends on anthropological global warming like the dot com industry depended on the internet he claims to have invented.

If you follow the money it becomes clear that it is the “consensus” that is being driven by gargantuan financial backing, not the skeptics, as climate change alarmists would have everyone believe.