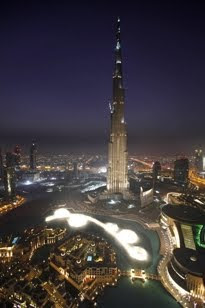 Burj Dubai, the world’s tallest tower, is a spire of superlatives.

The 160-story skyscraper will open on January 4, the fourth anniversary of Sheikh Mohammed bin Rashed al-Maktoum’s rule in Dubai.

Under the Sheikh, Dubai has seen a boom in record breakers, impressive firsts, and baffling spectacles. For example, the city is or will be home to the world’s first refrigerated beach, a twirling tower, the world’s largest arch-supported bridge, and artificial islands in the shape of the world map.

• The building will sport the fastest elevators in the world, traveling at 10 meters per second (22 miles per hour). They will also be double-decker elevators, with each deck supporting up to 21 people.

• To keep out the desert heat, 10,000 tons of coolant with flow through the tower every hour.

• Dubai Tower will be the highlight of the worlds’ largest indoor shopping center, with space for 1,200 shops nestled among 30,000 apartments.

But Dubai is a very different place this month than it was in 2004 when construction began on the tower. As AFP reports:

Plunging property prices and weak demand had already put a dampener on new schemes even before last week’s shock announcement by state-owned giant Dubai World that it wants to halt debt payments for six months.