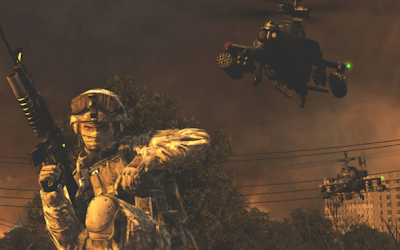 Call of Duty: Modern Warfare 2 is said to have broken the single-day sales record for an entertainment property. According to Activision, the game earned $310 million in North America and England alone in its first 24 hours.

On Thursday, Activision said that its brand-new Call of Duty 2: Modern Warfare, which hit store shelves on Tuesday, had "shattered" the previous record for opening-day sales by an entertainment property, earning $310 million in North America and the U.K. alone. That equates to 4.7 million copies of the new game sold in those regions, and, if true, would eclipse the previous first-day sales record of $310 million globally, which GTA IV set in May of 2008.

Given that GTA IV had nearly doubled the previous record of $170 million, set by Halo 3, I wondered at the time whether its new mark was unassailable. Clearly, the new Call of Duty has answered that question, and loudly.

Now, we have to ask once again whether there could be another challenger for the crown. It would be foolish, it seems, to conclude that there won't be, given the dominance of franchises like Guitar Hero, Rock Band, Grand Theft Auto itself, and, of course, Call of Duty.

A bigger question could be: Why do we care? That's especially true given how frequently these mega-records are broken. Still, it's hard not to get worked up about what it means for a single video game title to bring in hundreds of millions of dollars in a single 24-hour period, particularly while we're still mired in a fairly deep recession.

There are all kinds of arguments to be made about why video games do well in tough economic times, and I've trotted a number of them out in this space. But most games don't come anywhere near selling $310 million worth of product in their entire lifetime, let alone on their first day, so Activision--and its Infinity Ward studio, which actually developed the new Call of Duty--seem entitled to a little bit of attention.

But at the rate these records are falling, I'm going to have to start thinking twice every time a new game sends me one of these announcements about breaking records. Sooner or later, it's not going to be all that noteworthy, no matter how much money is earned in a single day. Until then, though, watch this space for word on which game will be next in line for the throne.

Daniel Terdiman is a staff writer at CNET News covering games, Net culture, and everything in between.
Posted by Robalini at Thursday, December 03, 2009

I felt the same way last year when Grand Theft Auto IV was racking up perfect score after perfect score. In fact I feel very similar about both games. Both games follow brilliant titles: COD4 and GTA3 and both titles just kind of bored me whereas their predecessors barely left my consoles. For COD my big complaint is the really boring multiplayer

For The lovers of this great series of games Call of Duty, we bring you great news, because the waiting time for the Modern Warfare 3 pc game is very close to completion, and the company Activision is finalizing details to try this new version promises to be more realistic than previous ones. Call Of Duty 2011 Announced!