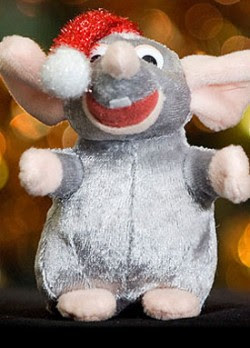 Thanks to Richard Metzger and DangerousMinds.net for the following...

A TOY mouse supposed to sing "Jingle Bells, Jingle Bells" has been recalled amid claims it warbles "paedophile, paedophile".

The 4ins festive novelty, with Santa hat and a cheesy grin, has left parents stunned.

One mum said: "When I squeezed its tummy I couldn't believe my ears. I recognised the tune, but the words were certainly not traditional. Luckily my children are too young to understand."

The £2.99 Chinese-made novelty is sold in smaller shops and on market stalls. Distributors Humatt, of Ferndown, Dorset, said the man providing the voice could not pronounce certain sounds. His singing was then speeded up to make it higher-pitched - distorting the result further.

A spokesman insisted: "We've slowed the song down and it definitely says Jingle Bells. But we have recalled them now just in case anybody might take offence."

To hear it sing: