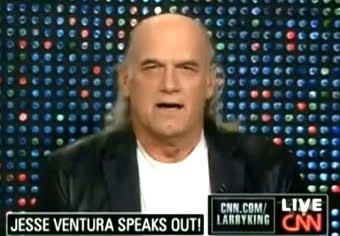 Ventura Delivers Some 9/11 Truth On Larry King Live
“Why is it off limits to question and ask questions?”
Steve Watson
Infowars.net
Tuesday, Dec 1, 2009

Former Governor of Minnesota, ex-Navy SEAL and retired pro-wrestler Jesse Ventura raised some important unanswered questions regarding the 9/11 attacks in an interview with Larry King on CNN last night.

Footage from the 9/11 based episode showed Ventura attempting to gain access to the infamous hanger 17 at Kennedy International Airport where debris from the World Trade Center is kept away from public scrutiny.

“The 9/11 conspiracy is simply that the government hasn’t been truthful with us.” Ventura stated.

“I mean, Larry, a couple weeks ago, the head of the 9/11 Commission legal, I believe former attorney general Farmer from New Jersey, came out publicly and stated unequivocally that at some point the government decided that the American citizens would not hear the truth about 9/11. I find that very disturbing.” he continued.

“I find it very difficult that those buildings could fall at the speed of gravity without being assisted in some way. And I used to do demolition for a living. And how could those buildings fall as fast as I used to freefall out of an airplane?”

“If you took a billiard ball and dropped it the height of the twin towers and you just merely stopped it and started it every floor in freefall, it would take over a minute and a half to reach the ground. The buildings were down in ten seconds.”

“So you think there was something on the inside.” King replied.

“Why is it off limits to talk about it? Why is it off limits to question and ask questions? You know when I went through Navy SEAL training I was taught in demolition that there is no dumb question, that if you don’t understand it then it is not dumb. That’s how I have lived my life and I have a lot of questions that the government refuses to answer.”

King also asked Ventura his opinion on the troop escalation in Afghanistan:

“It angers me because it reminds me a great deal of Vietnam.” Ventura answered.

“I mean, the Russians couldn’t beat them, the English couldn’t beat them over there. You are not going to get a military solution in my opinion in Afghanistan. It’s impossible, yet we’re just like in Vietnam, are we propping up a phony government, like we did in Vietnam?”

“I would pull out of Afghanistan and I would pull out of Iraq and I would bring our boys home. It is our job to protect their safety, and not be sending them off to wars. What are we accomplishing there? I look at it from a personal point of view. I don’t see how these two wars have helped Jesse Ventura or the USA one bit, other than to drain our economy.” Ventura fumed.