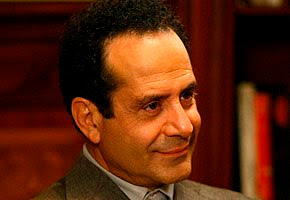 "Monk" hit the big time on its way out.

"It's truly gratifying to have been on the air for eight years and to finish the run with a beautiful episode that people wanted to be a part of," said Mandeville Films' David Hoberman, an executive producer on the show. "'Monk' has achieved a lot in its eight years on the air -- this being one of them."

In the finale, San Francisco cop-turned-private eye Adrian Monk (Shalhoub) finally solves the case of wife's murder, a mystery that had been haunting him for the entire series.

Shalhoub won three Emmys for his work on "Monk."
Posted by Robalini at Saturday, December 19, 2009

Generally I do not post on blogs, but I would love to mention that this post extremely forced me to try and do therefore! really nice post. thanks, here's a similar subject you'll like [url=http://corina33.blogs-blogs.com/71255/The+advantages+of+owning+a+Natural+Light+Alarm+Timepiece.html]Timepieces[/url]