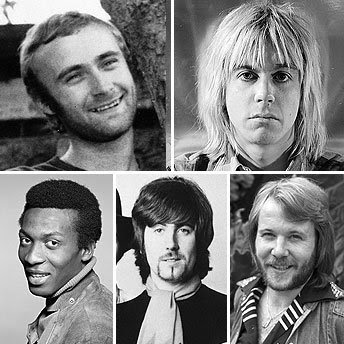 The Stooges, Genesis and ABBA lead the list of accomplished artists that will be inducted into the Rock and Roll Hall of Fame next year. The class of 2010 also includes the Hollies and Jimmy Cliff.

Iggy Pop says his band has been patiently awaiting this honor for some time. "We've been rejected seven times, and we would have set a record, I think, if it happened again," the Stooges' frontman tells Rolling Stone. "It started to feel like Charlie Brown and the football. I had about two hours of a strong emotional reaction after hearing the news. It felt like vindication. Then I kind of scratched my head and thought, 'Am I still cool? Or is that over now?' "

The news was quite surprising for the Swedish pop group ABBA. "I didn't think this would happen, because we were a pop band, not a rock band," says Benny Andersson, who helped found the group in 1970. "Being a foreigner from the North Pole, this feels really good."

The Hall of Fame has earned a reputation for convincing long dormant groups like Talking Heads and Led Zeppelin to perform at induction ceremonies. Though Graham Nash hopes to play with the Hollies for the first time since 1983 ("I'll be there with bells on," he says), an ABBA reunion is less likely; the group split in 1983 and has refused all offers to reform ever since. "It's very tricky because Agnetha [Fältskog] is not flying," Andersson says. "The people who are really fond of ABBA for what we did, I think we are doing them a favor by not going out." He said he wouldn't completely discount a performance, but wanted to talk it over with the rest of the group. "It's 99 against 1 [odds], though."

A reunion of the Peter Gabriel era of Genesis, who haven't played together since a one-off in 1982, is more likely — however Phil Collins' recent medical problems have left him virtually unable to play the drums. "I don't think he'd be itching to play early 1970s Genesis music at the moment," says Genesis keyboardist Tony Banks. "Peter [Gabriel] is a bit elusive, but I'll probably talk to him soon and see if he has any concept of what he wants to do. I don't feel a great need to play. I'm happy just to drink."

Cliff, known internationally for his work in the 1972 The Harder They Come and its iconic soundtrack, becomes the second reggae pioneer to join the Hall, after Bob Marley, who was inducted in 1994. Cliff's "Many Rivers to Cross" is one of Rolling Stone's 500 Greatest Songs of All Time.

The 25th annual induction ceremony will be held March 15th. The event, which is returning to New York's Waldorf Astoria, will be broadcast live on Fuse. The Hall of Fame will also give the Ahmet Ertegun Award (an honor for non-performers) to record executive David Geffen and songwriters Barry Mann & Cynthia Weil, Ellie Greenwich & Jeff Barry, Jesse Stone, Mort Shuman and Otis Blackwell.
Posted by Robalini at Thursday, December 31, 2009

Email ThisBlogThis!Share to TwitterShare to FacebookShare to Pinterest
Labels: Rock and Roll Hall of Fame