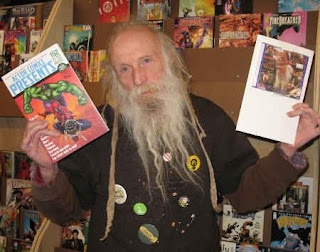 Somewhere in Ann Arbor is a comic book writer who could have changed the course of history. He is a man who earned fame and notoriety for the comics he wrote in the 1970s and now he's homeless and "couch surfing."

At the age of 61, he hangs out in Ann Arbor meeting "chicks" and talking about how he "helped kill John F. Kennedy."

The "T" in T. Casey stands for Terrance and he's gone by T. Casey ever since he has been a published comic.

Brennan's most head-turning comics are the ones in which he tells of his involvement in the JFK assassination, as a victim of MK-ULTRA, an alleged CIA operation that involved brainwashing and experimenting with drugs.

In 1996, Brennan first wrote about what he says happened in the JFK assassination in his comic "Conjurella."

"It seemed to breathe new life into my comic career," Brennan said.

In 2006, Brennan wrote more about the JFK assassination in his comic "Hypothetical Cerebus" in Actor Comics Presents. He writes in detail about how he was forced to take a shot at JFK and what his life has been like since that historic event. Brennan's comic is for sale and can be purchased at Labyrinth Comics and Games, located at 324 S. State St. in Ann Arbor

"I wanted to tell the truth about the Kennedy assassination," he said.

Prior to JFK's assassination on Nov. 22, 1963, Brennan said he would go with his father who would get hypnosis from a Dr. Earnshaw. While they were there, the doctor would drug them with or without their consent, he said.

Brennan claims that Dr. Earnshaw and David Ferrie, who some conspiracy theorists believe was involved in the JFK assassination, came at him with a needle and injected something into his neck. He was then stuffed in a crate and flown to Dallas.

Brennan said he woke up in a storage room. A hood was put over his head and he was forced to fire a shot at the president who was driving by on the street below. Brennan said he didn't know if the shot connected, but he thinks it ricocheted off the pavement and hit a pedestrian.

He was then pushed out of the way and Ferrie continued to shoot. Brennan said they left the storage room and ran into Lee Harvey Oswald on the second floor, pushing a broom. Brennan was 15 years old at the time of the assassination, he said.

Brennan's name is mentioned in the book "Reclaiming History: The Assassination of President John F. Kennedy" by Vincent Bugliosi, which he carries around with him on he streets of Ann Arbor.

Brennan said he would take a polygraph test and testify about his experience, but no one seems to care.

"Nobody wants to know or hear about it," he said.

After Brennan's comic success in the 1970s, he says he was blacklisted by the comic book industry. He started having financial problems and took jobs in restaurants and started "couch surfing."

"I had been through such hell in the '80s," he said. "No one knew I was a celebrity comic book writer."

In 2003, Brennan said a car hit him while he was crossing the street on the corner of Washtenaw and Oakwood in Ypsilanti. He couldn't speak and he had "post-concussion syndrome," he said. Brennan was never able to get a lawyer.

After his accident he thought he was 15 years old, he said. One day he looked in the mirror, saw his gray hair and was brought back to reality. He recovered at a "punk house" and he said the sounds of punk rock music playing made him feel better. Since his accident, he's never been able to work, he said.

"There's times when it (being homeless) works well," he said. "I'm having fun, but there are times when I'm on the brink of disaster."

Brennan doesn't hang out on the streets asking for money. He gets meals at the shelter and sometimes people come up to him and give him money. He says he doesn't really think about food and is "way better off starving."

Whenever he needs a place to crash, he calls a woman from a notebook of names of "foxy girls" that he carries around with him.

"It's like everything about me seems to fit," he said.
Posted by Robalini at Thursday, April 29, 2010