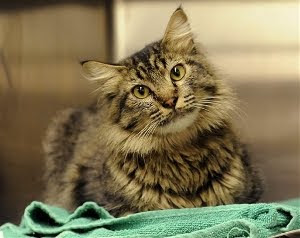 No one knows how a tabby cat named Charles traveled the 1,300 miles from his New Mexico home to Chicago, but he's set for a complimentary flight home on American Airlines in a carrier donated by an Albuquerque business.

Charles disappeared about eight months ago while his owner was out of town and a friend was caring for him.

"Oh, I was crushed, and I found out while I was away volunteering with Habitat for Humanity, and I was so upset because I was in New Orleans so there was nothing I could do," said Robin Alex, of Albuquerque.

Then earlier this week, Alex received a call telling her Chicago Animal Care and Control had picked up her wandering cat as a stray. Staffers reached out to Alex after finding that Charles had a tracking microchip embedded between his shoulder blades, said the agency's executive director, Cherie Travis.

But Alex said she could not afford the round-trip ticket to Chicago to bring Charles home, so she was afraid he might be euthanized.

Enter fellow Albuquerque resident Lucien Sims. Sims said he has a tabby cat who strongly resembles Charles, and was moved when his mother sent him an online story about Alex and her pet.

Most importantly, Sims was on his way to Chicago on Thursday for a wedding, so he said he would go to the shelter, pick up Charles and bring him back to New Mexico.

Sims has made all the arrangements for Charles' return, including getting a company to donate a cat carrier and American Airlines to waive the cat's travel fee.

Travis said Charles is definitely ready for his next adventure.

"He's in good condition," she said. "He needs a good brushing. He's got a little bit of a cold -- a little bit of an upper respiratory infection -- but otherwise he's in great condition."
Posted by Robalini at Sunday, April 25, 2010