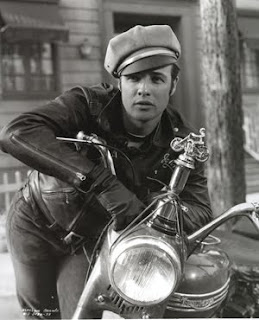 Better Late Than Never?
The Wild One
Nathan Rabin
April 19, 2010

When I was 14, I spent a month in a mental hospital. As recounted in my memoir, I was horrified to discover that I had somehow landed in the sole television-free psychiatric ward in the known universe. TV and films had led me to believe that people in mental hospitals did nothing but watch TV, when not lurching about in circles and accusing people of stealing their thoughts. Nevertheless, the powers-that-be considered television an unnecessary distraction, and possibly even a source of entertainment and pleasure, so it was consequently verboten.

Nevertheless, one day every month, a television and VCR would be wheeled into the ward to provide a reward for the institution’s highest achievers. I, alas, did not fall into that category, so I did not get to see the movie of the month: 1953’s The Wild One. The selection surprised me. I’d never seen The Wild One, but I certainly knew of it. and from everything I’d heard, it seemed like the kind of rebellious, hip, cool, anti-authoritarian movie that would drive the glowering, authoritarian killjoys who ran the ward into an apoplectic rage.

I knew of The Wild One as the source of one of film’s most notorious, widely quoted (and mocked) catchphrases. When asked what he’s rebelling against, Marlon Brando famously sneers, “Whaddya got?” I knew it as an iconic image: an impossibly young, gorgeous Brando, clad in the official greaser outfit of blue jeans, a white T-shirt, and a black motorcycle jacket, leaning insouciantly against his hog with an enigmatic look on his face.

At 14, I wondered why such a sexy, dangerous, edgy movie, a film banned in Great Britain for 14 years due to its explosive content, was being shown to mental patients. Yet even as I grew up to become a cinephile and then a Brando obsessive—not to mention the originator of the Great Gazoo Theory—I never got around to seeing The Wild One. Until now. Better late than never, eh?

What I learned is that while Brando’s performance was sexy, dangerous, and edgy, the film itself is anything but. The first sign that The Wild One is not the incendiary cinematic Molotov cocktail of my 14-year-old mind’s overactive imagination comes with an opening crawl breathlessly announcing:

THIS IS A SHOCKING STORY. IT COULD NEVER TAKE PLACE IN MOST AMERICAN TOWNS—BUT IT DID IN THIS ONE.

IT IS A PUBLIC CHALLENGE NOT TO LET IT HAPPEN AGAIN.

Not very rock ’n’ roll, right? The film that would inspire the legend of James Dean—whom Brando famously dismissed as “wearing my last year’s wardrobe and using my last year’s talent,” a not-so-subtle intimation that Dean ripped off his Wild One persona for Rebel Without A Cause—opens on a Reefer Madness note of frothing hysteria.

Brando and his gang come roaring into a sleepy small town—just like yours!—with a swagger in their steps and their mouths fixed in permanent sneers. At first, they’re content merely taking in a motorcycle race, but before long, they’re engaging in dangerous stunts like crossing the track while the race is still in progress. This predictably upsets the denizens of this small town, one of whom confronts the gang with the withering barb, “What’s the matter with you chowderheads? You in such a big hurry to die?”

Of course, the outlaw outfit is anything but helpless. They return fire in a silly war of words by deriding the town as being full of “squares” who are too “chicken” to “drag [Brando’s character] a hundred yards for beers.” Brando’s sidekicks—all of whom seem to have been imported from a Bowery Boys programmer, and who devote most of their time and energy to drunken clowning—are full of praise for his motorcycle skills, crowing, “He can really go. He can really screw it on.”

Soon the gang is running amok, drag-racing for beers, back-sassing authority figures, stealing racing trophies, and generally causing havoc for good, decent people. It isn’t until Brando spies pretty waitress Mary Murphy at a diner that the film begins to feel like something more than a hysterical biker exploitation movie. While the rest of his gang is outside cracking jokes, Brando embodies a powerful internal calm.

He’s quiet and borderline genteel, dancing a discreet little two-step to a jazzy number on the jukebox, giving Murphy the trophy he’s stolen from the race, and generally letting his body language and piercing glance wordlessly convey sentiments and hungers too raw and subversive for a 1953 studio film. It’s that incongruous tenderness, the glimpse at the scared, sensitive little boy beneath the adult badass, that makes Brando so magnetic.

Back at the diner, Brando continues to hit on Murphy. When she asks where Brando’s gang is headed, he answers with a vexed, existential, “Oh man, we’re just gonna go!” Later, he continues, “On the weekends we go out and have a ball.” Alas, it isn’t always easy communicating a hipster mindset to a square, as evidenced by Murphy’s clueless retort, “Do you just ride around, or do you go on a picnic of some sort or something?”

I’m not entirely sure, but I suspect that line was meant to foreshadow the film’s never-filmed sequel, The Wild One: A Picnic Of Some Sort. You will not believe how Brando packs a pic-a-nick basket! Yes, he’s smarter than the average motorcycle hoodlum! Alas, not even Brando at his sexiest can sell a line like “A picnic? Man, you are too square. I have to straighten you out.”

Brando communicates exclusively in a hipster patois that was probably already comically dated back in 1953, delivering stream-of-consciousness jive talk about how “You’ve gotta stay cool, you’ve gotta wail. You got to put somethin’ down. You got to make some jive.” He’s the original white Negro, a bebop jazz musician, at heart too hip for this square world.

His cohorts likewise communicate like cartoon beatniks. In this clip, they lay some heavy jive on a daddy-o straight out of Squaresville, ya dig? A real L 7. The old man behind the bar and his customers inhabit the same diner, but they seem to exist in different universes and speak different languages. Oh, and also Brando delivers his signature line.

Then Lee Marvin rumbles into town as the head of a rival motorcycle gang, and I thought, “Here comes Lee Marvin. Thank God. He’s always drunk and violent.” So you can only imagine how horrified I was when Marvin and Brando inexplicably start singing about painting wagons. Or maybe I’m getting this confused with a later Lee Marvin effort.

Marvin delivers a big, boozy star turn full of malevolent humor and free-floating malice. The Wild One seems to be spinning its wheels until Marvin’s arrival, at which point it kicks into high gear. After Marvin gets arrested, Brando’s gang decides to spring him from jail, and the film finally begins to generate real suspense. There’s a great sequence where a fat townsman who has made the mistake of antagonizing the gang looks outside and sees only menacing headlights piercing the darkness, and hears the ominous revving of motorcycle engines preparing for an attack.

The Wild One then shifts gears, as a crazed militia seeks out Brando and beats him to a bloody pulp. The real menace, the film suggests, lies not with leather-clad bad boys sneering at authority, but rather with law-and-order types intent on punishing nonconformity, brutes with no respect for due process or our nation’s fine legal system. The Wild One’s superior second half occupies a world of creeping shadows and paranoia, heavy with intimations of violence.

Brando, you see, is merely misunderstood. He’s the hate that hate made, an abused child who grew up to be a rebel full of incoherent rage. Behind the hatred lies a murderous desire for love. He’s less the villain than a tortured antihero who is framed for the murder of an old man by a town eager to bring him down for who he is, how he looks, how he dresses, and what he drives, not because of his actions.

Laslo Benedek is credited as the director of The Wild One, but its real auteur is Stanley Kramer, a prolific producer and director who specialized in dour, heavy-handed message movies about Important Social Issues, like Guess Who’s Coming To Dinner. Accordingly, The Wild One is half atmospheric film noir/contemporary Western, and half solemn, campy message movie about the perils of mob justice, motorcycle gangs, and the plague of misunderstood, alienated youth.

Much of The Wild One feels clichéd and laughable today, but that’s partially because the film was popular and influential enough to transform many of its core elements into endlessly recycled conventions: Brando’s iconic greaser garb and petulant pout, the sinister motorcycle gang that comes rumbling into a small town with nothing but bad intentions, the star-crossed romance between the brooding, enigmatic drifter and the local good girl.

The Wild One is divided against itself: It’s square and hip, super-cool and crazy hokey. It marked a seminal moment in the evolution of American cool, and showed multiple generations how to be a badass. Brando’s biker was rock ’n’ roll before Alan Freed coined the term, a consummate punk decades before the Ramones bit his fashion sense.

So why, of all the movies in all the mental hospitals in the world, did some mystery person choose The Wild One as our monthly mental-hospital reward? Was it because it ultimately preached the futility of rebellion? Or was it because they thought we would recognize and embrace Brando’s sneering cyclist as one of our own, a lost little boy adopting a series of outlaw poses? There’s a reason the image of Brando in his leather jacket and jeans has ricocheted through pop culture for the last 57 years, even as The Wild One curdled into kitsch: The character and performance proved iconic and enduring, not the sometimes-riveting, often-ridiculous movie in which they’re trapped.
Posted by Robalini at Wednesday, April 28, 2010

The Wild ones said...