Super-High-Alcohol Beer Heads to the U.S. 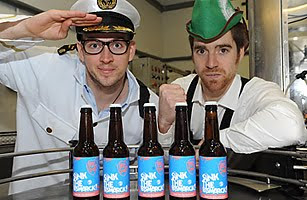 Thanks to a war among European brewing companies, it's never been easier to catch a healthy beer buzz. Or get yourself totally sloshed. In November, BrewDog, a three-year-old Scottish microbrewery, released a new brand, dubbed Tactical Nuclear Penguin. The beer set a new record by weighing in at a scary 32% alcohol by volume (ABV), more than six times the strength of familiar domestic brands like Budweiser. As explained in a cheeky video on the company's website (warning: the clip contains simulated penguin sex), the brewery was able to attain the high alcohol content by freezing the beer at a local ice cream factory, at temperatures as low as -6°C (21°F), for 21 days. Alcohol freezes at lower temperatures than water, and removing water from the solution increased the alcohol concentration.

Jim Watt, one of BrewDog's co-founders, says that some 400 bottles of Tactical Nuclear Penguin are in the process of being shipped to a few stores in California and New York City, including a Whole Foods location; about half of the consumers buying beer from the BrewDog website are from the U.S. Watt's eyes are clearly fixed on the American market. "We're keen to push the envelope," he says, "and challenge people's perceptions of how beer can be enjoyed."

A warning label on the Tactical Nuclear Penguin bottle does state, "This is an extremely strong beer; it should be enjoyed in small servings and with an air of aristocratic nonchalance. It is exactly the same manner you would enjoy a fine whisky, a Frank Zappa album or a visit from a friendly yet anxious ghost."

Some alcohol-watchdog groups aren't laughing. The chief executive of Alcohol Focus Scotland, Jack Law, has blasted BrewDog's high-alcohol products as "irresponsible," especially at a time when Scotland is experiencing "severe alcohol-related problems." In December, BrewDog received a slap on the wrist from a British alcohol regulatory body, the Portman Group, which ordered that retailers pull the company's 18.2% Tokyo beer brand off shelves because of its marketing tactics. A note on the Tokyo label says, "It is all about moderation. Everything in moderation, including moderation itself. What logically follows is that you must, from time, have excess. This beer is for those times." After the beer was pulled, BrewDog came out with a 1.1% ABV brew meant to tame the critics. Its name: Nanny State.

The drinking games continued in February when a German brewer, Schorschbrau, released a 40% ABV beer called Schorschbock. The BrewDog boys fired back a few weeks later with high-octane concoction Sink the Bismarck!, which checks in at 41%, enough to reclaim the "world's strongest beer" mantle (the name is a not-so-subtle reference to the famous German battleship deployed during World War II).

For now, Sink the Bismarck! is only available for purchase on BrewDog's website, and the 500 or so bottles that BrewDog has produced are already sold out. Watt promises that more are on the way. Because of the painstaking process involved with producing such a strong drink, an 11.2-oz. bottle of Sink the Bismarck! costs some $60, minus shipping. Tactical Nuclear Penguin costs about $53 a bottle, and can also be ordered online.

Even if these brands end up being carried by more bars and retailers, Watt firmly believes that the high prices will prohibit unsophisticated drinkers (read: high school kids at a kegger, or college students on spring break) from just picking up the stuff and chugging it. But you can't deny that if the beer becomes more widely available in stores, or if other brewers mimic BrewDog's strategy, it could become hazardous. Since most drinkers don't check the alcohol level on the label like they would the expiration date on a milk carton, an unsuspecting soul with money to spare could sip a little too much strong stuff.

"We're all for responsible consumption," Watt says. But as we all know, beer and responsibility often don't mix. So enjoy the beer wars at your own risk.
Posted by Robalini at Sunday, April 25, 2010

Alcoholism treatment to addicts of the said substance is imperative...These people should be educated more or less of the effects of the substance before it gets worse.

missouri car insurance I have been to your site several times now, and this time I am adding it to my bookmarks Your discussions are always relevant, unlike the same-old stuff on other sites (which are coming off my bookmarks!) Rock on! Jason - texas car insurance