Zoinks! Marijuana substitute is more potent than pot, and legal 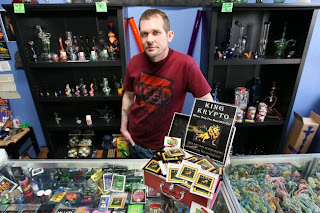 A woman dressed in a hoodie and sweat pants walks into Steve Vogt’s tiny shop on Las Vegas Boulevard, just south of police headquarters, and asks for “schwag” — a term for low-end marijuana.

Vogt goes into a back room and emerges with what looks like pot.

The woman pays him and as she leaves, Vogt delivers his signature line: “Hold it in.”

Minutes later, Vogt receives a call from a customer looking for 30 grams of his weed.

But this product isn’t what you’re thinking.

Vogt’s shop, Weedz, 628 Las Vegas Boulevard South, has over the past two years done a brisk business in mind-altering substances — King Krypto, Spice, Puff, Tribal Warrior, Sleep Walker, Black Mamba and numerous other brands — that are legal. None of the colorful packages under the glass counter at Weedz contains THC, the active ingredient in marijuana.

Rather, the dried herbs have been treated with chemicals with names like JWH-073 and JWH-018 that when smoked provide a high that the academics who invented it say is more potent than marijuana.

This is Nevada’s answer, for now anyway, to the nationwide movement to legalize marijuana gaining steam nationwide, most notably in California.

Vogt isn’t the only small-business operator selling the chemically enhanced herbs, which experts say are mostly manufactured in China, but he might be their most passionate marketer. Wearing a T-shirt with his trademark “Hold it in,” and a picture of Shaggy — the “Scooby-Doo, Where Are You!” character best known for his chronic case of the munchies — Vogt said he smokes the same weed he sells. It keeps his 42-year-old body fit and hasn’t given him problems.

Best of all, he said, it gives him a better high than marijuana without the risk of arrest or jail time.

“It keeps people out of the (justice) system,” he said.

The chemicals in the herbs Vogt and other smoke shops sell — JWH-073 and JWH-018 — are named for John W. Huffman, a 77-year-old chemistry professor at Clemson University who first helped synthesize them.

Huffman started researching cannabinoids — a class of compounds that bind to the same brain receptors as THC — about 25 years ago. The research was primarily funded by the federal National Institute on Drug Abuse.

In an interview, Huffman said JWH-018 was created in the summer of 1995 by participants in an undergraduate research program. The event wasn’t seen as anything out of the ordinary.

The student made “all of 100 milligrams of it” and sent it off to his pharmacology collaborators “and that was it,” the professor said. Researchers wrote a paper on its receptor-binding activity and its impact on lab mice.

After JWH-018 emerged as a recreational drug about two years ago, Huffman had a post-doctoral student purify what remained in a lab freezer and then sent samples to law enforcement agencies so they could train their drug-sniffing dogs to find it.

Why did he do that if it’s not illegal?

Huffman chuckled, then said: “It’s already illegal in Kansas; they’re working on it in Illinois and other places.”

Others states are lining up legislation to ban it as well. Some politician in Nevada will probably eventually join in.

“I haven’t heard about this yet,” said state Assemblyman John Hambrick, R-Las Vegas, who is retired from the Secret Service. “But I’m going to look into it.”

Officer Jay Rivera, a spokesman for Metro Police, said the JWH compounds aren’t on the radar of Las Vegas police. But officers are on the lookout for another marijuana-like chemical, HU-210, which Rivera said can be 800 times more potent than THC.

“A clear tell-tale sign is if the package says, ‘Not for sale in the USA,’?” Rivera said.

But Huffman cautioned that users shouldn’t assume JWH is safe. It has been studied so little that, “using the stuff is like playing Russian roulette.”

Some people have experienced high blood pressure after taking it. It metabolizes more slowly than THC and therefore stays in the body longer. One mother said her daughter was high for a week after using it.

The compound is so untested that Huffman thinks it should be classified as a Schedule 1 drug, similar to marijuana, heroin or LSD.

“It’s dangerous,” Huffman adds. “I mean, you have no idea what the long-term effects of this stuff are.” The drug has “exactly” the same effect as THC, but “is more potent by a factor of 10 — but THC is not very potent.”

Even though Huffman warns the public not to use JWH, he said he has been attacked for inventing it. In a live interview with a Moscow television station last year he was “accused of poisoning the youth of Mother Russia,” he said.

“They asked me why we didn’t destroy it when we made it,” he said. “Well, we didn’t anticipate anybody was going to use it. I guess we probably should have.”

Unlike JWH compounds, THC has been studied for decades and found to be relatively safe, Huffman said.

So does he favor legalizing marijuana?

“I have semi-mixed feelings about it,” Huffman said. But legalization “would probably be the smartest thing because it’s not that dangerous and you can’t kill yourself with THC.”

That’s music to the ears of David Schwartz, campaign manager for Nevadans for Sensible Drug Laws, which is trying to collect 90,002 signatures to get an initiative to legalize marijuana on the ballot in 2012. If the signatures come together more quickly, Schwartz said, they hope to convince the 2011 Legislature to legalize pot.

In November, California voters will weigh in on a ballot initiative calling for the legalization of marijuana, a move that’s gaining some momentum because it could bring $1.4 billion in tax revenue to a state hit hard by the recession.

If marijuana were legalized in Nevada, Schwartz’s group would like to see 50 growers approved and 120 stores, with a $50 excise tax plus sales tax. Only adults 21 and older would be allowed into the stores.

Back at Weedz, anyone can get in. And $40 can net you 3 grams of King Krypto, a tiny package labeled as “herbal incense” and “not for human consumption.”

Vogt says he tells people not to smoke it, “but people will smoke whatever they want.”

And when they do, the effects vary.

Metro visited the store about six months ago because someone smoked it and complained about getting sick.

Vogt never heard back from Metro.

Then there are experiences like the one memorialized on a sticky note that Vogt found in his mail slot last week.

Written in blue ink, it states: “Wow ... I was inside the matrix of hell for like 4 hrs. I have never been that high in my whole (expletive) life. It took me like six hrs. to find my hotel. I didn’t know my own (expletive) name. You guys are (expletive) hilarious. See you next time. The Krypto King from Canada.”

Vogt giggles at the note. “I’d say that person was pretty happy with his experience.”
Posted by Robalini at Sunday, April 25, 2010