"In the 14 years we've been doing South Park we have never done a show that we couldn't stand behind. We delivered our version of the show to Comedy Central and they made a determination to alter the episode. It wasn't some meta-joke on our part. Comedy Central added the bleeps. In fact, Kyle's customary final speech was about intimidation and fear. It didn't mention Mohammad at all but it got bleeped too. We'll be back next week with a whole new show about something completely different and we'll see what happens to it."
Matt Stone & Trey Parker

Picture above includes a drawing of Mohammad which ironically has aired in South Park's opening credits...

And from the April 25th Episode of The Simpsons: 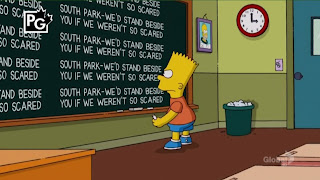 Because the admin of this web page is working, no doubt very rapidly it will be renowned, due to its quality contents.

I really like what you guys are up too. Such clever work
and coverage! Keep up the very good works
guys I've you guys to our blogroll.

This website was... how do I say it? Relevant!
! Finally I have found something that helped me.
Thanks a lot!

Because the admin of this site is working, no hesitation very shortly it will be well-known, due to its feature contents.

Good day! Do you know if they make any plugins to assist with SEO?
I'm trying to get my blog to rank for some targeted keywords but I'm not seeing
very good gains. If you know of any please share.
Thank you!

Visit my web-site :: from nubiles jill

It's remarkable to go to see this web site and reading the views of all friends regarding this post, while I am also keen of getting know-how.