Santa Barbara County wants to close the door on Floatopia 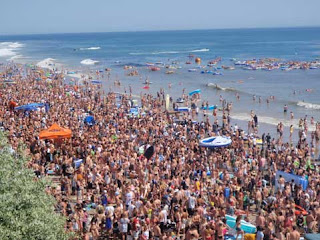 Robalini's Note: Let's hear it for UCSB, which nearly 20 years since I went there, still proves it leads America in how to party...

Santa Barbara County wants to close the door on Floatopia
Up to 12,000 revelers attended last year's party on the beach. Supervisors, citing alcohol use, injuries and pollution, plan to block access to the area Saturday.
April 07, 2010|By Steve Chawkins

Authorities in Santa Barbara County aim to deflate Floatopia, a mega-party set for Saturday that has exploded over the last few years with the aid of social media websites.

Officials told county supervisors Tuesday that they plan to close access points to popular beaches in Isla Vista, near UC Santa Barbara, this weekend. Last year, as many as 12,000 revelers converged on the narrow strip of sand in a day of what county parks Director Dan Hernandez called "unmitigated chaos."

Deputies handed out 78 citations for alcohol-related crimes and made 13 arrests, Sheriff Bill Brown said. Thirty-three participants required hospital treatment for alcohol poisoning, heat exposure and cuts. Two of them toppled off the bluffs that border the beach.

Started about five years ago with several hundred people drinking just offshore on rubber rafts and inner tubes, the celebration has been a barely planned rite of spring, with no formal sponsor, security or provisions for emergency aid. It has inspired similar events, most notably in San Diego.

In Santa Barbara, the 2009 edition was bigger -- and, to county officials, more environmentally damaging -- than before: "Without restroom facilities, many attendees simply used the ocean, creating a large concentration of human waste that threatened sea life," according to a statement from the Sheriff's Department.

Some of last year's partygoers concede that the sheer size of the crowd was overwhelming but say the county is overreacting. They acknowledge the mass of trash left on the beach but say that UC Santa Barbara students and area residents helped clean it up.

"Not having Floatopia is unrealistic," said Liz Buda, a 2009 UC Santa Barbara graduate who serves on the board of the Isla Vista Park and Recreation District. "It's a yearly IV event and people hold it very dear to their hearts."

Buda, who said she registered 100 voters at the 2008 Floatopia, argued that local residents were not consulted by county officials.

"There was a lack of public process," she said.

Although the university is not officially connected with the event, several students expressed interest this year in applying for the necessary permits. One of them, Dan Par, criticized the planned barricades, telling supervisors Tuesday that closing beaches is "undemocratic and an abuse of your power."

"You can close the beach, but the people of Isla Vista will party day and night," he vowed. Beach access from university property also is being closed.

After he used an obscenity, Par was cautioned to watch his tone. Continuing to speak beyond his allotted three minutes, he was led away from the podium by deputies.

The sheriff said extra deputies will patrol the beaches to enforce the closure and an alcohol ban. Rescue workers will cruise offshore on personal watercraft.

"Being out on the ocean on a raft and being intoxicated are not two good things to blend together," Brown said.