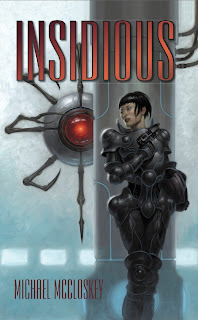 Leaked stories of strange new rules and codes of behavior indicate something's gone sour in the deep space retreats of the superrich corporate execs. Some say that it's only the eccentricities of the powerful leaders of capitalistic society. But others speak of dark, twisted rituals, human slavery and illegal experiments in banned technologies.

Bren Marcken is a robot handler and strategist on a special team of the United Nations Space Force, formed to occupy the corporate space stations and seize their technological secrets. To accomplish the mission, he's been authorized to field artificial intelligences that he considers just as dangerous as the enemy.

Chris Adrastus is an aggressive young executive whose careful machinations have carried him to a high position at the powerful European Union company, Vineaux Genomix. Instead of finding satisfaction, he's become disillusioned with what he discovers at the top of the executive world.

Aldriena Niachi is a covert operative of Black Core, a Brazilian software company with a global sphere of influence. She's about to find out what Black Core will do for a technological lead. Do some kinds of knowledge come at inordinate cost, even for a supercorporation?

This title is available in softcover and electronic formats at Amazon, Barnes&Noble, BooksAMillion, iUniverse, and others.

"I thought the story was fresh, intriguing, it captured my interest and after a while I couldn't put the book down."
-Michael Goll

"I like visions of the future that are dark, and Insidious fits that bill -- I loved the ending."- I. Kirnos
"...its universe has properly defined constraints, a background that makes sense in a human way, and a plot that makes you hunger for more."
- Maarten Hofman

"Insidious is a real page-turner: it has a fascinating central mystery whose resolution really took me by surprise and, if that's not enough to keep you reading, plenty of suspense. I just *had* to find out how it all turned out."
- T. O'Neill
Posted by Robalini at Wednesday, April 28, 2010

Email ThisBlogThis!Share to TwitterShare to FacebookShare to Pinterest
Labels: Insidious