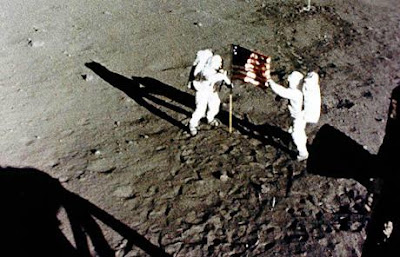 Apollo 11 hoax: one in four people do not believe in moon landing
A quarter of Britons believe the Apollo 11 mission moon landings in 1969 were a hoax.
17 Jul 2009

Eleven of the 1009 people surveyed thought Buzz Lightyear was the first person on the Moon.

The Toy Story film character was named alongside Louis Armstrong. Eight of those taking part thought the late jazz musician made the first moon walk.

Not quite three quarters correctly answered that Neil Armstrong took the first step onto the Moon.

Eleven per cent of people polled thought the Apollo programme was a recent as the 1980s, with just 68 per cent knowing that the first moon landing took place in 1969.

A total of 44 per cent considered the missions to be a waste of money.

The survey was conducted for E&T magazine, published by the Institution of Engineering and Technology.

Editor in chief Dickon Ross said: "The Apollo moon landing is mankind's most outstanding engineering event so it's deeply worrying that such a large number of people should think the first moon walk never happened and that the public's belief in the legitimacy of science and technology seems to be declining over time."

Conspiracy theorists have pointed to a number of flaws in the pictures and footage from the Apollo missions as proof that the moon landings were staged.

For instance, the US flag planted by Neil Armstrong and Buzz Aldrin was said to be waving in a breeze, which should not have been possible on the airless moon.

Nasa's response was that the flag waved a little when deployed due to residual momentum from contact with the astronauts, not because of windy weather.

Alleged light and shadow anomalies were the result of the highly reflective surface of the Moon and the wide-angle cameras used by the astronauts, said the space agency.

Another question mark over the lack of dust kicked up by the lunar module was explained by the fact that the craft's rocket exhaust fired out sideways rather than straight down.

Leading space scientist Professor John Zarnecki, from the Open University, said: "I think it would have been a far greater achievement to have mocked the whole thing up AND to have kept it quiet for four decades.

He pointed out that moon rocks brought back to Earth by the Apollo astronauts were very similar to those returned by a series of unmanned Soviet probes.

Veteran astronomer Sir Patrick Moore said about those who believe the moon landings were a hoax: "If ignorance is bliss they must be very happy."
Posted by Robalini at Sunday, July 26, 2009

What's your take on this, Robbie? I do not believe that we landed on the moon, after watching the excellent documentary on Fox Television (of all places)... you can watch it here: http://video.google.com/videoplay?docid=-2265515730495966561

I am open-minded on this in both ways...

BTW, I know the main producer of this documentary, and he gave me some great advice while I was working on Smile...

Dude, Smile was awesome!! Are you going to make that movie yourself, or are you going to try to find a screenwriting agent who will get that script sold to someone else in Hollywood?

ONE GIANT HOAX FOR MANKIND
I’ve analyzed more than 500 NASA Apollo images by Adobe Photoshop CS4.
I enhanced the sky portion of the images.
To my surprise I found the Moon in the sky of several images, I found shooting stars, two landing modules (in the same image) and the stars in position as seen from the Earth. And not a shred of evidence that any Man has ever been on the Moon.
See for detail:
href='http://members.shaw.ca/alex11/moonhoax/' target='_blank'>MOON HOAX
So I conclude that the images were faked by NASA. Then come the Europeans and the Japanese, and they can not see landing sites. Then comes NASA and they produce a black square and say this is the lunar rover. Would u believe yourself that to be true? I doubt it.
Just the simple fact that 40 years ago, with very basic electronic end instrumentation technology they could land on the Moon, but it takes 40 years with very sophisticated technology and we still do not have clear images of the landing sites, proves to me that such landings never took place.

Some of the arguments to prove the hoax are wrong (mainly related to shade) some are right, this means that it was a hoax.