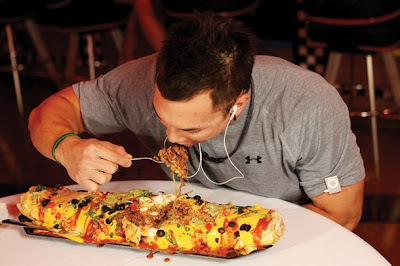 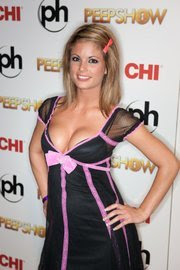 Man vs. big food
The verdict’s in: NASCAR Cafe’s Bunyanesque entrees and not-so-subtle roller coaster are more fun with a sexy woman nearby
E.C. Gladstone
Thu, Jul 16, 2009
Elliott Kleven attempts to eat the B3 burrito at the NASCAR Cafe at the Sahara. The burrito weighs six pounds and has only a handful of conquerors.

What can i tell you? the signs said “Come Get Pounded.” Naturally, I had to invite Laura Croft.

Oh stop. Laura, Playboy’s Miss July 2008 (and becoming even better known as “Holly Madison’s roommate”), talks about loving greasy food and roller coasters so much you’d think she was sponsored by the Tomboys Against Anorexia lobby. Seeing NASCAR Café’s boldfaced ads, with lines like “Our BLT is Heart-Stopping” and “The B3 Burrito/It’s Child Size. Literally,” you could hardly criticize my eagerness to give the girl what she wanted. A lot of it.

Because, even in a town where one-upmanship is a given, the Sahara’s eatery-cum-amusement experience tops them all. Huge finish-it-and-it’s-free foods have been around for decades in the world of novelty nutrition, but one would think, in the face of America’s government-acknowledged obesity epidemic, that they might be fading.

Nuh-uh. Sure, the Plaza hotel has retired its legendary 9-pound burger. But the Peppermill still delivers its eight-to-10-egg omelets. Hash House A Go-Go griddles weapons-grade pancakes. Napoli Pizza offers a healthy 30-inch pie. And in the ever-changing big-burger contests, deal in Cheeburger Cheeburger (20-ounce) and Toby Keith’s I Love This Bar and Angioplasty (32-ounce). For sure there are others.

But none holds a candle to the NASCAR Café’s mega-menu. Yes, they have a 2-by-4 burger (two meats, four cheeses) made with two half-pound ground rounds. And a BLT with a full pound (post-cooking weight, mind you) of bacon. And a 180-ounce beer tower. But nothing tops the B3 6-pound burrito. This is a serious contest: Clean your plate solo in 90 minutes, and you get not only a winner’s T-shirt (guess what size it comes in?) but also—heh-heh—two unlimited ride passes to Speed, that roller-coaster thingy that sticks out of the front of the building.

All these are the brainchildren of one dangerous man, Sahara’s Tim Emert (a Certified Executive Chef, thank you very much), who can’t quite explain how he landed on six pounds, but estimates the calorie count as somewhere in the 8,000-9,000 range ... or about a week’s worth for your average thinspo. The one he and an assistant made us (yes, it takes two) was roughly the 250th. To date, four people have won the challenge.

“NASCAR fans really love to eat,” said Emert, straight-faced. “So we figured, ‘Eh, let’s give ’em something to eat.’”

Was Laura up to taking on the whole burrito? Perhaps, especially with understudy eater Keltie Colleen (one of Peepshow’s three little piglets) … before Emert brought out all the other items, too, and then his top-selling appetizer sampler, sporting a toasted sourdough ball filled with spinach artichoke dip, Italian sausages, jalapeno-cream cheese poppers, hot wings, mozzarella sticks, chicken tenders and onion rings, atop their signature curly fries. “I drank a cup of pickle juice, cheese whiz, somebody’s loogie, egg, guacamole and beer for a hundred dollars once,” says Croft, unconcerned about testing her impossibly flat stomach.

“This is obscene,” Emert admits—though not a bit apologetically.

To my surprise, the food wasn’t just big, but actually not bad. The burrito’s top round beef was stewed slowly with peppers and spices. The Angus burger was solid but savory … the BLT (which took the biggest hit in our blitzkrieg) had crisp lettuce, ripe red tomatoes and thick-cut applewood-smoked bacon perfectly cooked to that decisive moment between chewy and crisp. The Italian sausage on the sampler plate was good enough for mama’s Bolognese.

But the pièce de resistance was the pound of chipotle-seasoned curly fries topped with chocolate and pineapple. Yeah, let the expletives fly. Then try them. Chef Tim may be, as Keltie called him, an off-season Santa. But clearly there’s a bit of Satan in the man. And Satan has discovered a taste fusion that is … well, kinda sexy. It would work better with crushed instead of chunk pineapple, but that’s nit-picking. “That burrito is so five minutes ago,” said Keltie, digging in with a vengeance.

We of course finished our afternoon—as alcohol, insulin and lipids coursed through our arteries like a microbial biker gang—with a necessary spin on Speed, the ride best described as a roller coaster on ADD. The way Speed shoots off instead of slowly climbing, you don’t have time to panic. But my stomach sure gave me a big “WTF?” as we got aboard. It ended, honestly, too fast to cause hurlage. Another round and I would’ve been there for sure. Laura admitted to feeling badly—but only about not eating more. She confessed to pulling her punches. “I have a nude photo shoot this weekend.”

Excuse me? Most women wouldn’t eat this way a month before a nude photo shoot. But 72 hours?! Clearly, Daisy Dukes-wearing, beer-loving, NASCAR- and UFC-endorsing Laura Croft was created in a frat basement laboratory by Spuds McKenzie’s evil med-student disciples. Either that, or cloned from Kelly LeBrock’s character in Weird Science. And though she was awarded the loser’s pink “weenie” T-shirt instead of the black B3 “winner” one on her way out, Croft was unflappable.

The B3 Burrito Proportions

Im going college this year, so I am quitting gaming for good. Here are my accounts I owned over the years. Some of these accounts I bought, But since im quitting Im going to give them all away.

When not given the right anorexia treatment, anorexia may result to anemia and low white blood count which are necessary in fighting off infections.

This is very interesting, You are a very skilled blogger.
I have joined your feed and look forward to seeking more of your excellent post.
Also, I have shared your site in my social networks!
ageless male - yeast infection symptoms men
- ageless male