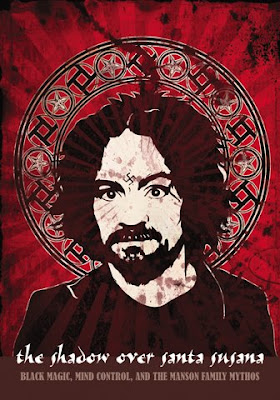 The Shadow Over Santa Susana
by Adam Gorightly

To mark the 40Th anniversary of the 1969 Tate-LaBianca murders, we have arranged for an in-store lecture and book signing by Adam Gorightly to celebrate this new, special edition publication of "The Shadow Over Santa Susana" from Creation Books.
This new edition has over 200 RARE PHOTOS.

This very special event will also include a musical set by the band, The Flying Sorcerers, which will include the song Flowers & Blood, co-written by Adam Gorightly about the Manson family to commemorate the publication of this book.

A look-a-like contest will be open to all in attendance with prizes awarded for the best
Manson, Squeaky and Sexy Sadie likenesses.

The title "The Shadow Over Santa Susana" is an updated version of the wild story of Charles Manson and the Family. Author Adam Gorightly's massive exposé on the late 1960's convergence between the Love-Ins of the "Hippie" counter culture," the so called Hollywood "Beautiful People," and the apocalyptic presence of one Charles Manson. Gorightly not only takes you deep into the starstruck city of Los Angles, through the desolate, desert landscape of Death Valley, and the inner workings of the "Family," but also deep into the creepy-crawls of Charlie's world and mind. "The Shadow Over Santa Susana" is the most well-balanced account of what transpired, more so than even Bugliosi's classic "Helter Skelter," which is told from a dry, prosecutoral perspective. "The Shadow Over Santa Susana" retains the necessary, factual attention to detail while interjecting a sense of the insider, underground perspective. It is much more contemporary and far more exhaustive than any previously attempted work on this subject -bar none!

It is superlatively definitive. Reserve your copy today!

This event at La Luz de Jesus Gallery on Sunday, August 9th, 2009 will be quite memorable and historic given that this event takes place on the exact day of the 40th anniversary of the Tate / LaBianca murders -and in the same Los Feliz neighborhood, no less!