Helped by a Big Name, Letterman Bounces Back 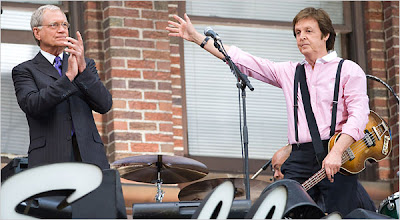 Helped by a Big Name, Letterman Bounces Back
By BILL CARTER
July 16, 2009

Is David Letterman back?

If not all the way, he certainly seems to be getting there. Mr. Letterman, CBS’s late-night star, scored an impressive win last week as his audience topped that of NBC’s “Tonight Show” and its new host, Conan O’Brien, during that show’s least-viewed week since total viewers have been measured.

And Mr. Letterman trumped his win with a show that became a television event Wednesday night as Paul McCartney returned to the Ed Sullivan Theater 45 years after the Beatles’ American TV debut and performed a concert on the marquee in front of a crowd of about 4,000.

Mr. O’Brien continues to have the strongest of the shows among younger viewers that many advertisers prefer, though his margins in that area have shrunk in recent weeks. He has dropped to third place more regularly in total viewers, not a place where “Tonight” has often landed.

Last week, Mr. O’Brien attracted 2.8 million viewers, below the previous low for “Tonight,” 3.3 million, which Mr. O’Brien set in his third week. Mr. Letterman had 3.7 million. “Nightline,” helped by coverage of the Michael Jackson memorial, was the winner with 3.8 million. (“Nightline” benefits by being measured for half an hour versus an hour for the other shows.)

The “Tonight” numbers represented a steep drop from those scored by Jay Leno a year ago in the same week. Mr. Leno’s “Tonight” show had 4.6 million viewers, meaning Mr. O’Brien’s show has fallen by 38 percent.

The story among younger viewers, especially those 18 to 34, continues to be much better for Mr. O’Brien. He was up 26 percent in that group from Mr. Leno last year, though down 7 percent among viewers 18 to 49.

Mr. Letterman has been closing the gap a bit among younger viewers and last week managed a virtual tie with Mr. O’Brien among viewers 25 to 54, the first time he has done that since Mr. O’Brien’s arrival.

Guests have played a hand; Mr. O’Brien could hardly match Mr. McCartney (his guest was Dana Carvey) and ratings for NBC’s 10 p.m. time period, which can help or hurt late-night shows, were especially weak Wednesday night.

But one NBC late-night executive, who asked not to be identified when analyzing the network’s competitive situation, said of Mr. Letterman, “Dave is definitely on his game; Conan has to respond.”

Wednesday’s show with Mr. McCartney was exciting even for the host. Mr. Letterman said in an e-mail comment: “Given the history of the Beatles at the Ed Sullivan Theater, it’s humbling just to have him on the show. And for him to play in front of thousands in front of our theater was beyond generous and very special for us.”

Mr. McCartney made the suggestion to perform outdoors, an executive from the Letterman show said.

Mr. Letterman had leaned toward having Mr. McCartney sing on the same stage where the Beatles first appeared in America in 1964. But the singer said he would perform only if he could make it an event.