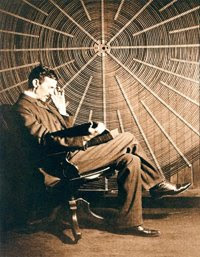 Nikola Tesla is the man responsible for every form of modern technology we have available to us today. There would be no Twittering, Googling, BlackBerrys, cell phones, satellites in space, airplanes, x-rays, or physics as we know it.

Did anyone remember Nikola Tesla on his birthday?

One man certainly remembered Nikola Tesla this week, Dr. Ljubo Vujovic. Dr. Vujovic is nominated this year to receive the American Biographical Institute, Inc. Award: "2009 Man Of The Year in Education" for his work as President and Editor of the Tesla Memorial Society of New York Website which is the main source of information about the famous inventor and scientist Nikola Tesla and other world figures in history.

It’s fascinating that Tesla has more notoriety for the lack of attribution given him than all his works combined. Though great efforts have been made by scholars all over the world, to finally recognize the genius and contributions of this great man, there still remains an air of mystery surrounding his life and works.

Many consider it was the most obvious of reasons: that his inventions were too progressive for the technical resources available and also too far advanced for humanity’s collective psyche at the time. Most theories point to his lack of business sense and a combination of his failed project with J.P. Morgan while building the "The Tower of Dreams,” a World Broadcasting Tower in Long Island that would have broadcast telephone messages across the ocean; broadcast news, music, stock market reports, private messages, secure military communications, and even pictures to any part of the world, had funding not ran out or other more insidious circumstances prevailed at the end.

Tesla told Morgan, "When wireless is fully applied, the earth will be converted into a huge brain, capable of response in every one of its parts."

Tesla obviously predicted the WWW and our computers. In 1937, he said, “At this very moment scientists working in the laboratories of American universities are attempting to create what has been described as a "thinking machine." I anticipated this development.”

He also invented our wireless boxes at the turn of the century.

The Teleautomaton, was a device Tesla invented in the 1890’s. It has a spooky resemblance to our wireless boxes atop our cable connections that make it possible for us to sit in Starbucks and drink coffee, type on our laptops, talk on our cell phones, fly our airplanes, watch our reality TV, and listen to our radios while waiting in traffic.

The Teleautomaton was simply an apparatus with Tesla coils. These coils, in the initial experiment were inserted into a boat and tuned to resonate with other coils located on shore. By tuning the coils, an operator on shore could remotely control the boat.

His resonance experiments at one point got a little out of hand even here in New York.

"In his lab at 46 E. Houston Street, while conducting mechanical resonance experiments with electro-mechanical oscillators, he generated a resonance of several surrounding buildings but, due to the frequencies involved, not his own building, causing complaints to the police. As the speed grew he hit the resonant frequency of his own building and, belatedly realizing the danger, he was forced to apply a sledgehammer to terminate the experiment, just as the astonished police arrived. (Wikipedia: O'Neill, "Prodigal Genius" pp 162-164).

It was probably experiments like those that got Tesla branded as a mad scientist. He has been accredited with experiments in time-travel, alien communication, and machines that record thought among many others. His later experiments, accessing “free energy” most likely got him in even more disfavor. Generally, not being able to “bill” energy, doesn’t go over too well with the “the powers that be.”

We tend to attribute “genius” to spiritual force or a gift from the Divine Spirit. Though Tesla had no gripe with religion; he said, “Religion gave man “ideals” that give significance to his life and most importantly promoted “good conduct,” he surprisingly (though associated with occult activities and so forth), had purely mechanistic views of mankind.

“To me, the universe is simply a great machine which never came into being and never will end. The human being is no exception to the natural order. Man, like the universe, is a machine. Nothing enters our minds or determines our actions which is not directly or indirectly a response to stimuli beating upon our sense organs from without. Owing to the similarity of our construction and the sameness of our environment, we respond in like manner to similar stimuli, and from the concordance of our reactions, understanding is barn. In the course of ages, mechanisms of infinite complexity are developed, but what we call "soul” or "spirit," is nothing more than the sum of the functionings of the body. When this functioning ceases, the "soul" or the "spirit" ceases likewise.” (Source)

Most of us consider Tesla a visionary before his time; but surprisingly Tesla says in his own words:

“My enemies have been so successful in portraying me as a poet and a visionary," said Tesla, "that I must put out something commercial without delay." (Source)

Was he joking? Was he truly a pure scientist? Would his experiments eventually lead him to harnessing spiritual force? Would Tesla have found the “God” particle?

The bottom-line is Tesla certainly bridged the gap between science and spirit; whether he acknowledged this or not.

Maybe he didn’t believe in life-after-death, but his inventions surely have kept him very much alive-after-death.

great blog, wanting to learn more about tesla and censorship of him