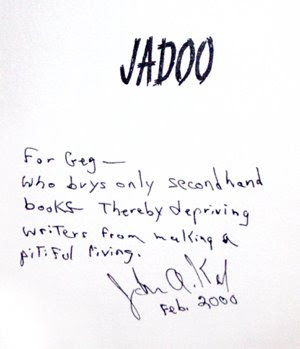 John Keel, journalist, author, fortean, and originator of some of the most unique theories on UFOs and the paranormal, died on July 3rd in New York City. His influence on generations of researchers is probably immeasurable.

Born Alva John Kiehle on March 25, 1930, Keel began writing at an early age. He was producing a column in the local newspaper in Perry, New York by age 14, and moved to New York City at 17 to pursue a career as an author and adventurer. He was drafted into the U.S. Army in 1951 and worked for the Armed Forces Radio Network, where he once broadcast a program from inside the Great Pyramid at Giza.

After his tour of duty was over, Keel set out on a trip through the middle east to visit fakirs, magicians and occultists and wrote his first book about the experience, Jadoo, published in 1957. Fate magazine gave Keel an early interest in the UFO enigma, and together with Ivan Sanderson, they began to write a write a book on the subject in the mid-1960s. They quickly found that their views were incompatible, and Keel began research into what would later become seminal books such as The Eighth Tower and UFOs, Operation Trojan Horse.

Keel first challenged the extraterrestrial hyposthesis with his idea of the “superspectrum,” which theorized that UFOs were controlled by intelligences that moved freely between wavelengths of the electromagnetic spectrum, appearing and disappearing from the infrared and the ultraviolet. Building on the ideas of little-known researchers like Meade Layne and Trevor Constable, he also proposed the theory (and provided ample evidence for this) that UFO entities were not from other planets, but were most likely native intelligences that had been involved with mankind throughout history and prehistory, and perhaps did not have our best interests in mind. These ideas were heresy to the ufological partyline at the time, and continue to be, which is a testament to their originality and implications.

In 1975, Keel rocked the paranormal community with the publication of The Mothman Prophecies, which was his take on the strange events leading up to the Silver Bridge disaster in Point Pleasant, West Virginia on December 15, 1967. In 1966, Keel began investigating reports of a frightening creature in the area around the town. Dubbed “Mothman,” the entity appeared as a headless human form sporting large wings and glowing red “eyes” in the chest area. Mothman did not fly like any known bird, bat or insect, swooping down on unsuspecting motorists and teenagers, and taking off from the ground vertically without moving its “wings” before keeping pace with fleeing cars and disappearing.

Keel documented other weird goings-on in Point Pleasant for nearly two years, including poltergeist phenomena, strange visions, doppelgangers of Keel himself and a scary character who called himself Indrid Cold. Critics claimed that he took storytelling liberties in The Mothman Prophecies, changing events and timelines to suit his narrative, but the essential message of the book still rings true. As Keel stated in the text, “Once you have established a belief, the phenomenon adjusts its manifestations to support that belief and thereby escalate it.” This hypothesis has been tested numerous times since in other UFO “flap” areas, (such as events around the Dulce, New Mexico area in the late 1970s and the more recent Stephenville case) and continues to hold its own.

In the late 1980s, Keel founded the New York Fortean Society and continued to write and lecture periodically well into the late 1990s.

In 1999, I called Keel and asked for a quote for the release of a collection of articles from The Excluded Middle, my old magazine. He politely refused a few times, but finally offered “The truth is out there, but it’s nowhere in this book. Buy mine instead.” The quote went on the back cover of Wake Up Down There: The Excluded Middle Collection when it was published the next year. The title of that book and this blog is based on a strange phone conversation related by Keel in Mothman Prophecies.

In 2000, I finally visited Keel in New York and we had lunch before visiting the Museum of Natural History and a store that sold all manner of bones and skeletons. His comments on the hubris of some scientists and paranormal researchers were cantankerous but delivered with a smile, and he signed my copy of Jadoo.

John A Keel will be sorely missed.

P.S. In some sort of cosmic trickster way, Keel may have gotten a final laugh as my computer locked up and apparently died as I was writing this obituary. After a couple of tries, it miraculously resurrected itself. Long live Keel!

Didn't notice you'd linked (and reproduced) the entire obit until now. Thanks, man.