Why go back to the Moon? 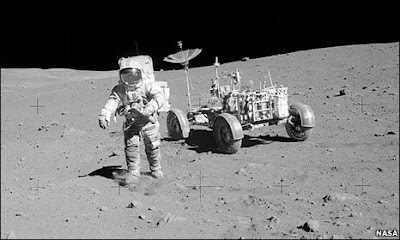 Sunday, 19 July 2009
Why go back to the Moon?
Apollo barely scratched the surface of the Moon
By Richard Hollingham

The Apollo Moon landings were a remarkable technical, scientific and political achievement and their 40th anniversary is undoubtedly a cause for celebration.

I've been privileged enough to interview seven of the men who walked on the Moon and I'm enjoying this Apollo nostalgia-fest as much as anyone.

One phrase though always sticks in my mind, and it came from the last man on the Moon, Gene Cernan. He asked: "When are we going back?"

Perhaps now, the more important question is: why are we going back?

One thing that often gets forgotten in any assessment of Apollo tends to be the science. As well as gathering all that rock, every lunar mission carried scientific experiments.

"The samples that Apollo brought back are still being analysed and we're still learning new things from these.

"They were absolutely crucial in enabling us to understand a lot about the Moon. After Apollo, we came up with the hypothesis that's currently accepted of the Moon's formation: how the Moon was formed by the impact with the Earth of a Mars-sized object, out of which came the Moon."

But Apollo barely scratched the lunar surface and, from a purely scientific point of view, there's a lot we don't know about the Moon.

It's far more than a dead lump of rock, with its complex geology and regular Moonquakes. Paul Spudis of the Lunar and Planetary Institute in Houston, for instance, wants to know what lies beneath the dust.

He's keen to see a network of seismic instruments to investigate the Moon's interior geology.

"We had a seismic network which the Apollo astronauts set up 40 years ago but that only gave us a tantalising hint of knowledge," Spudis told the BBC.

"Ideally, what you want is a global network of seismometers on the Moon."

That word "tantalising" is one you'll hear a lot from lunar geologists - although we can see the Moon every night, we still don't know what it's made of and have yet to prove categorically how it got there.

Other scientists are eager to study lunar impacts - working out how often the Moon gets hit by lumps of space rock will help us assess how much at risk we are on Earth.

So here's the plan: over the next few years, a series of missions is planned to return to the Moon.

The first are up there now: Nasa's Lunar Reconnaissance Orbiter (LRO) and LCROSS - a mission designed to slam into the Moon's surface so scientists can study the resulting plume of debris.

After that would come MoonLite - an ambitious UK mission being developed to fire penetrators into the surface. A few years later, there'll be robots and finally, by 2020 or so, humans.

If that's all to happen, quite apart from the political commitments, there are going to need to be a great deal of technical developments.

Take MoonLite, for example. It consists of a lunar orbiting spacecraft and a series of missiles, or penetrators, which will be fired into the Moon to create a global network of seismic monitoring stations.

The penetrators themselves are based on military missile technology - a classic example of "swords into ploughshares". But getting them to land in the right place, the right way up - and still work, is a complex undertaking.

Quite apart from its goal to investigate lunar geology (which is perhaps a worthy enough ambition in itself), the mission necessitates developing a communications system, electronics and guidance systems. These will, argue MoonLite's backers, provide technology benefits, jobs and commercial opportunities.

Sir Martin Sweeting speaks for the mission's prime contractors, Surrey Satellite Technology Limited (SSTL): "Certainly from experience, the challenge of space throws up benefits which get spun back down into other areas of our more everyday existence," he said. "This is, in the longer term, a commercial opportunity."

However, I'm unapologetic in my belief that the primary reason we should go back to the Moon is because, as humans, it's what we do.

We explore, we investigate and ultimately, we establish a foothold.

The exploration of the Moon is maybe best compared with the expeditions to Antarctica.

They are both uncompromising, extreme environments that, at first, would appear to have little to offer to human advancement.

As it's turned out, Antarctica has proved to be vital for scientific discovery.

It has taught us about our atmosphere, oceans and climate. 18th and 19th century explorers were desperate to discover that last continent - in the 21st century the Moon provides an even greater challenge.

Many of these missions, including MoonLite, are far from assured. And there is no shortage of people suggesting we're better spending money elsewhere. But who can fail to be inspired when they look up at the Moon on a clear night?

Perhaps the most important thing about this anniversary is not that we've been to the Moon, it's that we're now going back.

Richard Hollingham is a freelance science write and broadcaster. He presents Give Me The MoonLite on BBC on Radio 4 on Monday 20 July at 2100 BST. He also presents two Discovery programmes about the Moon, starting on Wednesday 22 July on BBC World Service. All the programmes will also be available as podcasts.
Posted by Robalini at Sunday, July 26, 2009