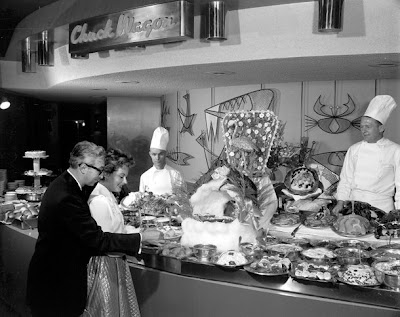 Pass the crab legs!
A writer spends far too much time at all-you-can eateries and discovers that the Las Vegas buffet scene is—wait for it—not bad
E.C. Gladstone
Thu, Jul 16, 2009

It seemed like a simple idea, really. As a blogger for a popular travel website (not the one with the lawn ornament), I get to experience everything new, cool, lavish and exotic that Las Vegas has to offer. But not every visitor is going to make reservations at Guy Savoy followed by VIP-circle seats for Le Rêve, especially these days. More likely than not, they’ll make a date with the Bellagio fountains, get two-for-one tix to see a magician and (you can bet) eat at a buffet.

Ah, the venerated Las Vegas buffet, innovation of El Rancho’s Beldon Katleman, who figured a $1 buffet (about $10 in today’s money, FYI) was a great way to get gamblers into the casino and get them eating fast so they had more time to lose money. More than 60 years later, buffets remain one of the third rails of Las Vegas resorts (the other is free valet parking)—you can’t touch ’em. Sure, there are a few properties without serve-yourself smorgasbords—but that’s only the exception that proves the rule. Even when Steve Wynn opened his namesake 5-star resort, he reserved valuable real estate for an all-you-can-eatery (it’s one of the most expensive, and yet still gets them lined up).

So rating the buffets seemed like a no-brainer. After all, there are only two or three that really struggle for the top spot (and they’re mostly in properties Wynn built). But nothing seems so hotly contested among visitors and locals alike. Travelers might admit their experiences are anecdotal, but residents are un-budge-able in their opinions. If one swears Spice Market (Planet Hollywood) is the best, then it is. Or Bayside (Mandalay Bay). Or Rio’s extensive Carnival World Buffet. During the recent Bon Appetit-sponsored Uncork’d festival, even some star chefs got in a tussle on the topic.

But there are also as many buffet priorities as there are selections. Some eaters care only about the prime rib. Some rate by salads or sushi. Some focus on the desserts. But most of all, what matter are the shrimp and crab legs—how big, how much, how fresh. Every local outlet (including this one) has readers’ polls, and somehow they all pick different winners. So I came to realize this wasn’t something I could phone in. I had to check them out. All of them. Well, at least, most of them. God help me.

Admittedly, I took some shortcuts. If I couldn’t find anybody praising a particular buffet (even the publicists!), I wasn’t bothering. If I’d wandered into a particular buffet in recent years and remembered the intestinal aftermath more than the food, I wasn’t subjecting myself again. And I wasn’t including the special Sunday brunches (or theme nights) that some properties feature—because in that territory, the long-standing go-to pretty much remains the exclusive, expensive Sterling Brunch at Bally’s (still quite good—and perhaps worth the price if you intend to get pickled with Perrier-Jouet while pigging out), unless you’re a hipster—then, as the Weekly’s Vegas’ Best issue pointed out, you want to be seen at Simon.

Unsurprisingly, the economic downturn has affected our buffets less than probably any other food destinations. Bellagio Buffet GM Mark Huston, who shared a laugh with me over the crab-leg frenzy, said he’s only seen about a 5-10 percent loss in business this year. I suggested he keep that to himself, lest he get beat up by other restaurateurs on the Strip. One can imagine, in a restaurant town like Las Vegas, that being a manager or chef (Bellagio’s is the overqualified Edmund Wong) at even one of the best buffets brings a mixture of professional pride and humility. On one hand, you feed a statistically massive number of people on a relatively solid quality level. On the other … visualize 60 percent of your patrons bingeing on steamed crab legs and shrimp topped off with chocolate ice cream, while you’re offering them lobster risotto (Spice Market, Rio), oxtail stew (Main Street Station) and flan (Le Village, Paris).

I, of course, was more intrigued by the peculiar than the predictable. But novelty, as they say down at Archie McPhee, has a way of wearing off. Sure, Morgan Spurlock ate only McDonald’s for a month while making his 2004 documentary Super Size Me. Sure, Anthony Bourdain has gulped down anything from seal eyes to warthog rectum for his globe-roaming No Reservations TV show. But this was nearly the equivalent of going into a restaurant and saying “bring me the whole menu.” Sixteen times over. Bellagio, just for example, offers 70 items on an average meal. Cravings (Mirage) must have more (they are certainly trying: you can get a gyro with your gyoza there now). Rio’s Carnival World claims more than 100 (no, I did not count). And as my deadline approached, I was forced to even visit two buffets on some nights. Those were truly moments when I considered bulimia as a career move.

KNPR/KLAS food critic John Curtas openly laughed at the folly of my task, when I had to forsake fine dining with him to do some “research.” The derision turned almost instantly to pity.

Or horror, in the case of Weekly contributor Jack Colton—at least judging by his face when he agreed to accompany me on an outing, only to see the growing intensity of my pursuit. I can only imagine what thoughts passed through the minds of the bussers who had to clear dish after dish from the table, with half-eaten small samples of anything that intrigued (I counted as many as 10 plates at some sittings). Perhaps they thought I had oral ADD. I’m not one to waste food, but after the first five or six outings, it became impossible to maintain equilibrium without taking the smallest reasonable samples. The urge to take a second bite became the sign of anything exceptional.

Colton, like many Vegas natives, has formative memories tied to certain buffets, but also feels they all suffer from what he calls “flavor tax.” That is, most of the food has somehow had the savor subtracted. And he’s right. A bountiful variety of often bland food really is impressive only in its mediocrity. Don’t ask me how the relatively “legendary” Le Village at Paris manages to make lamb loin, or for that matter, coq au vin, almost flavorless. Don’t ask me why the sushi is far superior at Bellagio than it is at Rio Village Seafood—but the latter has some of the best meats.

Still almost every place had at least one thing to recommend it, often quite unexpectedly. The Hilton had great fresh guacamole. Golden Nugget had very good collard greens. Palace Station’s rustic mashed potatoes were as good as they get. Spice Market at Planet Hollywood, in a holdover from Aladdin days, had good Middle Eastern mezza and kebobs.

One thing I discovered in my omnivorous odyssey is that price and quality really bear little relation. Breakfast at the Ports O’Call at Gold Coast ($5.95) is likely to be just about as satisfying as it is at Carnival World at the Rio next door ($12.99). Local-luring Seasons at Silverton Lodge or the nine (nine!) Stations Feasts may offer less variety, but really, most buffet content breaks down to a bit of Mexican, a bit of Italian and a bit of Asian—and frankly, they do them as well as (in some cases, better than) the Strip hot spots.

Value-hunting offers its own dangers, though: several properties offer buffets at impossibly low prices. Palace Station’s clearly makes its $7.99 dinner work by just offering a limited sampling: burgers, tacos, pasta, pizza, salad and a few other things, almost everything perfectly acceptable. But others clearly skimp on the quality—so much so that it makes me wonder if the term “Vegas buffet” shouldn’t have some government or industry A.O.C. oversight, like champagne or European chocolate.

The Plaza Downtown has an array of gourmet ambitions that truly must be seen to be believed, and a colorful clientele to match. It is well worth the price of admission ($9.99) if you have nothing more than some chewy lo mein. But for another “classic” Strip property that charges $8.99 at dinner, I suggest prospective diners consider how much they really enjoyed high school, and if they really want to relive the cafeteria one more time.

There are other double-down-style deals, too: MGM Grand and Excalibur offer all-day passes for those who want to challenge the “stays in Vegas” maxim. Other properties have weekend upgrades and theme nights: You pay more, you get more. The thought of Bellagio’s weekend dinner—$35.95 for venison, Kobe beef (I suspect American Wagyu) and more—brought an involuntary tear to my eye. Not sure if it was a tear of joy or terror.

When another friend admired a prime rib at an unrelated meal, and I immediately offered that it actually wasn’t as good as the slab at Village Seafood or Cravings, I knew I had fallen down the rabbit hole. I knew far more about the subject than one man should.

A bored statistician could set up a quadrant graph charting price vs. selection vs. quality and come up with some interesting facts on our feudal food service. An ecologist could do a sustainability study about the effect of Las Vegas alone on the population of the ocean floors. A climatician could even estimate the size of the ozone layer hole directly connected to the methane excreted by the cows raised to produce our beef. But as Ronald Reagan once said so grandly, facts are stupid things. In these dark and difficult times, some sort of stand must be made for that most American of pastimes: shameless overindulgence. And I am nothing if not a proud American. Now, please pass the Lipitor.

*Prices mentioned are often those offered for players’ club members. Subject to change and nothing to do with us, okay?
Posted by Robalini at Saturday, July 25, 2009

Oh shit. Robbie, If we knew you could review BUFFETS and be a paid food critic, you would've been a millionaire years ago!!!

Remember: "All U Can Eat" isn't a statement, it's a challenge...