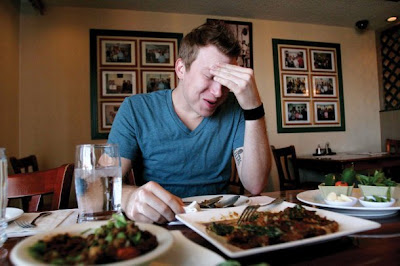 Weekly reporter Brett McAfee likes Sriracha. A lot. He puts it on everything, and not a dainty daub either. McAfee lays on the spicy garlic chili sauce thick; he says he hardly even tastes the stuff anymore.

Still, when McAfee volunteered to take on legendary local Thai restaurant Lotus of Siam's level-10 spice, we were a bit concerned. Lotus uses Thai chilis, bird chilis and the granddaddy of spice, habañero peppers, to spice up the authentic Thai cuisine that has earned them accolades from places like Gourmet magazine and Food and Wine and visits from famous Strip chefs like Mario Batali and Joël Robuchon. When we asked the restaurant's staff to dish out their spiciest stuff for our Food Issue challenge, we were met with skepticism. "We'll send out a five first," they told us.

The five was delicious. The restaurant's popular crispy rice appetizer with sour sausage balances the spice of tiny bird chilis with sour meat and cilantro for an addictive mix that is easily enjoyed despite the smoldering heat. McAfee, snacked with confidence. If this was five, 10 should be totally doable, delicious even.

But the 10s take things up a notch, or five. Habañeros feature prominently in some of these dishes, and the peppers are so spicy that Lotus flash freezes them, so the chefs won't be stung by their hot oil when they chop them to heat up certain dishes.

For a full understanding of McAfee's response to Lotus' level 10, view the photo gallery or watch the video of his fiery food challenge at the URL above. Or perhaps this will sum it up best. After McAfee had finished his tastings, wiped his brow and succumbed to a glass of water, Lotus' staff had this to say: "You're a tough one."
Posted by Robalini at Saturday, July 25, 2009