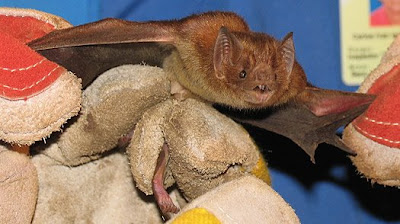 A shrill scream from the next bedroom jolted Maria Felix Flores from her sleep shortly after midnight on the muggy, tropical night of Feb. 22. She dashed into the adjoining room to find her adult son Carlos and his wife Maria Josefa sitting upright in bed with the lights on, panicked by the sight of their blood-drenched sheets. (Read "Could There be Real Monster Bats?")

Their feet were sticky and warm with blood, but neither felt any pain and couldn't figure out the source of the gush. Flores, however, took one look at the messy scene and knew exactly what had happened: the vampires were back in her little Nicaraguan town.

After examining the two, Flores discovered both had been bitten on their toes; the clean incisions and the profuse bleeding were telltale signs of a vampire bat attack. The vampire's bite is quick and razor sharp, so the sleeping victim doesn't feel the incision; and the animal's saliva contains a strong anticoagulating agent that leaves the victim bleeding for hours after the bite.

Flores, who was bitten last year, thought her town's vampire problem had been solved when government vampire hunters wiped out a bat colony in 2008. But once again, this sleepy town is being haunted by the winged menaces.

"The vampires are dangerous. Of course we are scared," says her neighbor Alberdina del Carmen Reyes, whose rustic wood-plank shanty is filled with gaps big enough for the flying mammals to sneak through during the night. Reyes' 5-year-old granddaughter was attacked in her sleep several weeks ago and awoke to a similarly gory scene in her bed. "The government tells us to cover our beds with mosquito nets at night," says Reyes, "but we don't have the money to buy them." Many of the impoverished families in this countryside community of Llano Grande 2, Masaya, have similar vampire tales. The government reports that more than 70 people here have been bitten by vampires in the past year. (See the top 10 animal stories of 2008.)

Vampires normally feed on the blood of livestock. But when cattle populations are suddenly sold off or moved to greener pastures, the bats seek alternative sources of blood. So far, none of the human victims have tested positive for rabies. But the government isn't waiting for an outbreak to take action. On Tuesday, the Ministry of Agriculture and Forestry sent two of its seasoned vampire hunters to the community to catch the winged pests and wipe out their colony, discovered at the bottom of an abandoned 200-ft. well that no one ever thought to cap.

Nicaraguan animal veterinarians Jose Amador and Carlos Ivan Iglesias don't exactly fit the Hollywood role of the dashing Van Helsing, but their arrival in the village was treated like a celebrity event. As the two men set up their capture nets around the well, local residents greeted them with gifts of bread, plates of food, coffee and a liter of some unrecognizable brand of soda. As the town folk retreated to their homes, dusk gave way to night and only the outlines of the wind-blown palm trees could be seen swaying against the starry sky of the moonless night. Amador and Iglesias, whom I had been talking to moments earlier in the dark, were suddenly snoring in their hammocks. I sat in the back of pickup truck trying not to smell like vampire bait and hoping I wasn't in charge of the hunt.

"We got one!" Iglesias yelled 20 minutes later, before I even realized he was out of his hammock and inspecting the perimeter net. In an instant, Amador was at his side, and the two men — wearing thick fire gloves — untangled the aggressive baby vampire from the net, grabbing it carefully as it squealed and hissed madly, trying to bite its handlers through their gloves. The veterinarians applied a poisonous gel to the body of the captured vampire and released it, allowing the animal to return to its roost, where the other bats — up to dozens in the colony — would dutifully lick it clean, killing themselves in the process.

While biological warfare might seem an extreme measure to some animal-protection advocates, international bat expert Merlin Tuttle, founder of Bat Conservation International, says that's the best way to handle vampires. The problem, Tuttle says, is when people — motivated by fear, ignorance or both — target all bats for extermination by dynamiting caves, which causes enormous environmental damage and often kills thousand of beneficial bats that eat insects, pollinate flowers and even disperse seeds as part of natural reforestation. Blood feeders, on the other hand, are extremely rare — only three out of 1,100 species of bat are vampires, and all are found in Mexico, the Caribbean and Central and South America.

Confusion about bats is understandable, considering the scientists who named them were equally confused. According to vampire-bat expert Bill Schutt, a zoologist and author of the book Dark Banquet, about 10 species of bats were erroneously named "vampires," while the true blood feeders were given more innocuous-sounding Latin names. "Bats [with scientific names that include] Vampyrum, Vampyrops, Vampyrina, Vampyressa, Vampyriscus and Vampyrodes aren't sanguivores [blood feeders], while Desmodus, Diaemus and Diphylla are true vampires," he says.

But when people act on their ignorance and kill beneficial bats, they are really putting themselves at even greater risk from the real blood-feeding terrors of the night: mosquitoes. Many more people die each year from mosquito-born diseases than from bat-transmitted rabies. And as someone who's already had dengue fever, I'm much more afraid of getting bit by mosquitoes than vampires.
Posted by Robalini at Saturday, July 25, 2009