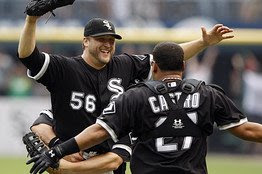 Mark Buehrle was a very unlikely candidate to throw a perfect game Thursday.

That’s no knock against Buehrle, a fine pitcher who threw a no-hitter two years ago and twice took a no-hitter into the seventh inning only to see it broken up. (The other five pitchers to throw a perfect game and at least one other no-hitter are all either in the Hall of Fame or, in the case of Randy Johnson, going to be.) In seven of the last nine seasons his earned-run average has been more than 20% better than the league average, after adjusting for ballparks. He also has more wins than any other active pitcher under age 31.

But Buehrle on Thursday was facing the Tampa Bay Rays, a team that ranks second in the majors in on-base percentage. Suppose each Ray batter in the lineup had his team’s overall OBP for each at bat against Buehrle — 0.353. Then the chance a league-average pitcher would retire all 27 of them was about one in 130,000.

Buehrle is better than league-average in many categories, but he hardly excelled in those that are strong indicators of pitchers most likely to throw no-hitters. Before Thursday, he’d given up 8.8 hits in every nine innings, compared to a majors-average of 8.9. He ranked 19th among 87 qualifying starters in walks plus hits per innings pitched. Just 64% of his pitches were strikes — good for 29th among starters. (In the perfect game, that edged up to just 66% of his pitches.) And he ranked 70th out of 87 in strikeouts per nine innings, with 5.03. He had six against the Rays, meaning Tampa Bay was 0 for 21 on balls they hit into play. In the ninth inning, one of those was converted into an out thanks to an amazing catch. All perfect games require some luck and great fielding; this one seems to have required more than most.