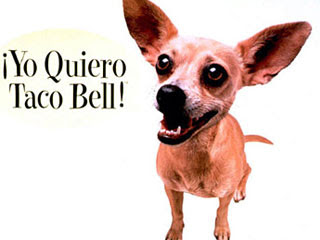 The famous Taco Bell Spokesdog – who charmed audiences with the catchphrase “Yo Quiero Taco Bell” – has died.

Gidget, the 15-year-old Chihuaha, suffered a fatal stroke Tuesday night, according to a report from People magazine.

The “mostly-retired” canine also appeared in the film “Legally Blonde 2,” starring as Bruiser’s mom. In addition, she appeared in a commercial for the ‘90s edition of Trivial Pursuit.

When she wasn’t starring in films and commercials, Gidget enjoyed taking hikes, sunning her fur and sleeping for 23 hours, her trainer Sue Chipperton told People.

“She made so many people happy,” Chipperton said. “Gidget always knew where the camera was.”
Posted by Robalini at Wednesday, July 29, 2009

Download Casino tyuueooru
http://stonewalljacksoncarnival.org/ - Free Casino Money
Additionally, you don?t have to stand out of your casino till the clock hits its opening time because a majority of online casinos are accessible 24/7.
[url=http://stonewalljacksoncarnival.org/]No Download Casino[/url]
2.
Play Casino Games
No matter how far your casino is located With online casino, you don?t have to worry about the location of your casino because the only thing that creates between you and your casino experience is the internet, so all you need to do is getting connected to the Internet and you can enjoy the gambling without having to spend your time visiting the local casinos out there.