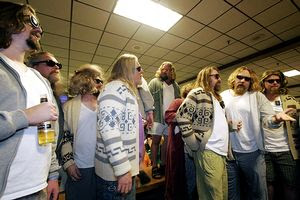 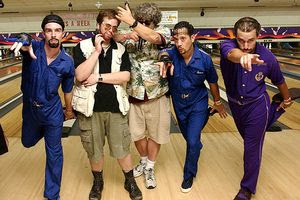 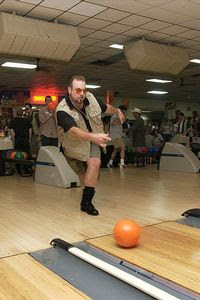 I'm sorry to disappoint fans of the film "The Big Lebowski," but the real Dude was never that much into bowling. His sport of choice, which he revealed to me in an interview earlier this week, was running. Yes, the man who was the inspiration for "quite possibly the laziest [man] in Los Angeles County" and in whom "casualness runs deep" was a dedicated runner, who said he often did six miles a day over regular routes throughout Seattle's northern neighborhoods.

"Well," Jeff (The Dude) Dowd said in his defense, "you had to be in shape to drink all those White Russians and make love to all those women."

Another disappointment -- The Dude didn't drink White Russians. Well, Dowd did, but only briefly -- he said it was more like a flavor of the month. But he really is called The Dude, and has been since the sixth grade.

The Dude was part of the Seattle Seven -- a group of people from the University of Washington charged with conspiring to incite a riot during a 1970 Vietnam War protest. But the marmot, the scissors-wielding nihilists, the iron lung, the faked kidnapping, the bowling, and the smart, incredibly funny script? That's all a product of the writing/directing team of Ethan and Joel Coen. (Although Dowd said he did provide some inspiration for The Dude's dialogue by saying the expletive starting with an "F" a lot.)

A writer, producer and movie rep, Dowd said he met the Coens when the brothers were fighting to get their first movie, "Blood Simple," released in 1984. Taken with his colorful personality, they later used him as the basis for the lead role in "The Big Lebowski," arguably one of the funniest comedies of the past 20 years. The film revolves around mistaken identity, a million-dollar ransom, hired thugs, a conniving businessman, an Oriental rug, nihilists, pornographers, a paranoid Vietnam vet, friendship and, of course, bowling.

''Those two guys make movies that are an homage to genres and 'Lebowski' obviously is very much a Raymond Chandler, classic L.A. crime story put together with a buddy movie and injected with lots of nitrous oxide and acid," Dowd said. "They called me up and said they were doing this movie and had cast it with Jeff Bridges and John Goodman. And I'm like 'Uh oh,' worried because I'm on the cusp, and it could go either way, with Jeff Bridges or Goodman [playing me]."

Not to worry. Goodman played Walter Sobchak, while Bridges played The Dude -- the bathrobe and pajama-wearing, White Russian-drinking "hero," who wants nothing more than to drive around, bowl, experience the occasional acid flashback and get back his living room rug ("It really tied the room together'') amid a chaos of outrageous characters and plot lines. The movie flopped commercially when it opened in 1998, though it did pick up the coveted Russian Board of Film Critics award for ''Best Foreign Film." As with "It's a Wonderful Life," however, audiences came to embrace it in ensuing years, turning it into a cult classic that spawned a book ("I'm a Lebowski, You're a Lebowski") and a nationwide Lebowski Fest. Fans pay up to $20 a head to watch the movie, enter trivia and costume contests, and bowl while wearing pajamas and robes.

At the Seattle fest this week, hundreds of fans filled a bowling alley near a suburban shopping mall. Every lane and lounge area was packed with people dressed as characters from "Lebowski." There were dozens of guys dressed as The Dude in bathrobes, just as many dressed as Walter in khaki hunting vests and shorts, guys in outrageous velvet jumpsuits, large-busted women in Valkyrien helmets, and even a guy in a homemade marmot costume. It was like a "Star Trek" convention, but instead of slightly pathetic Trekkies speaking in Romulan, you had guys laughing, drinking White Russians and spouting movie lines ("This isn't 'Nam, Smokey. This is bowling. There are rules.") while bowling.

It's a little frightening how much this guy looks like Walter.In other words, it was like most nights in a bowling alley, but also with nihilists in red skinsuits.

Not counting the person who brought the iron lung, no one topped Scott Glancy, who was a dead ringer for Walter, complete with the shorts, vest, stylized crew cut, dog tags and yellow-tinted shooting glasses. Aside from the glasses and dog tags, it wasn't really a costume. "This is how I dress," he said. "My mother called me after the movie came out and asked, 'Why do they have John Goodman dressed like you?'"

Glancy, 43, calls bowling "shockingly important" to "Lebowski," but Dowd said the bowling scenes were merely meant to provide a location where you could have the characters talk with the illusion of action. "Not only does The Dude not bowl in the movie, bowling is just a background," Dowd said. "There's no tournament. There's a big scene about the tournament coming up where Jesus is warning them about what he's going to do in the tournament, but there's no payoff. We never see the tournament. Walter talks about how important the tournament is but we never see a big-game 'Hoosiers' type moment."

Whatever the importance of bowling to "Lebowski," it's a movie that rewards with repeat viewings. I found it mildly amusing when it first came out, but uncontrollably funny during a midnight showing at a local art house a few months ago. And no, no substances, controlled or otherwise, influenced my second reaction. That is how a lot of people react to a second viewing, including Dowd and, he says, Jeff Bridges.

Dowd believes this is because people went with initial expectations of what the movie would be like, and were slightly put off by what it was. "It's much more of a Ethan and Joel mosaic than a traditional narrative plot movie, though there is some of that in there," he said. "Then we go in there with a different expectation the second time and we realize it's really a brilliant satirical movie you can see many, many times."

"This is not some little 'Lebowski 'cult," Dowd insisted. "There are a million people watching the movie right now in the United States. Well, tons of them. It plays across demographic and age lines. It plays Democrat and Republican. It plays young and old. It plays pretty much [to] all races, men and women and obviously stoners and college kids. This is the most popular movie in the U.S. Army. It's not 'Top Gun' or 'The Green Berets.' If you go over and poll guys in Iraq, I guarantee you the top movie is 'The Big Lebowski.' They may have the big movie of the moment, but the movie they watch most? 'The Big Lebowski.' You ask any sports team? 'Big Lebowski.' Any band? 'Big Lebowski.'"

There he is, Jeff Dowd himself, surrounded by Jesus lookalikes from the film.I don't know if I've seen too many baseball teams watching "Lebowski" in the clubhouse (their loss), but to call Dowd on this would be very un-Dude.

Besides, he's right. The movie is very popular and touches everyone, usually in the funny bone. Joe Germano, a marine biologist from Bellevue who attended the bowling party dressed as the white-suited pornographer Jackie Treehorn, says he brings the movie with him on his frequent assignments at sea. "It keeps the guys from going crazy," he said. "It's become a philosophy of life. Not to take things too seriously."

Dowd told me stories about Republican families that watch the movie together every Christmas to prevent old wounds from being ripped open after dinner, and of the Wall Street-area paramedic who told him at the New York Lebowski Fest that the movie saved his life after 9/11 because it allowed him to laugh again.

"It's pretty hard to watch 'Lebowski' without feeling better than when you went in," Dowd said. "It might be like freebase [cocaine] and the feeling runs out in 10 minutes, or it may last for a few hours or a day. But it's also a bonding thing as you can see in there.

"And that's a wonderful thing to be in some way part of -- to bring a little bit of joy into people's lives for a few hours."

The Dude abides, and I don't know about you, but I take comfort in that.

With the recession, the deficit, the mess in Afghanistan and the Middle East, terrorism, global warming and the spiraling cost of health care, it's good knowing "The Big Lebowski" is out there, via Netflix and available on VHS, DVD and Blu-ray.

Jim Caple is a senior writer for ESPN.com.
Posted by Robalini at Wednesday, July 29, 2009

Great photos of what looks like a great event. Hope everyone enjoyed their white russians responsibly. Now, when you get a second, check out this short video — ahamoment.com/pg/moments/view/4952 — about how Lebowski fests all started; (spoiler: a guy in Louisville had an ”aha moment”).