Back to 'Curb' and Getting a Kick 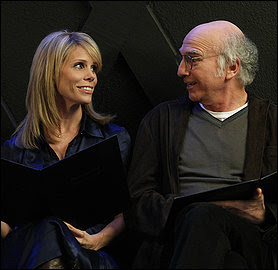 Back to 'Curb' and Getting a Kick
HBO Sitcom Still a Side-Splitting Vehicle For Larry David
Larry David manages to reunite with the stars of "Seinfeld" during the new season of the acerbically funny series "Curb Your Enthusiasm."
By Tom Shales
Washington Post Staff Writer
Sunday, September 20, 2009

Has anyone ever played a more merciless version of himself in an autobiographical enterprise than Larry David as Larry David in "Curb Your Enthusiasm," the fearlessly irreverent sitcom that returns Sunday for a seventh season on HBO? You're saying "Maybe Jerry Seinfeld as Jerry Seinfeld?" No, sorry; "Seinfeld's" Seinfeld had many flaws, but David's David is one large wart upon the landscape -- a cynical cyst, a catalytic corrosive and an accident that doesn't wait to happen because, well, who has time to wait?

Funny we should mention "Seinfeld," though. Well, not funny exactly -- but appropriate, because this season, the continuing story on "Curb" has David, for his own selfish reasons, trying to arrange a reunion edition of the classic comedy he and Seinfeld created together back at the dawn of the nutty '90s. The four key members of the original and illustrious "Seinfeld" cast will first show up together on the third episode of "Curb," airing two weeks from Sunday. They will appear in four more after that, probably including the 10th and last.

Within the first 15 minutes of the season premiere, the character called Larry David gets into, oh, maybe seven fights -- arguments that escalate into shouting. One is about whether it is proper for guests in someone's home to help themselves to cans of soda from the fridge. Larry goes ballistic about this; he always throws his entire being into whatever idiotic point he is trying to make.

Then there's the matter of "if there's anything I can do." Larry says it to his friend Marty Funkhouser (Bob Einstein, one of our greatest living deadpans) when he learns that Funkhouser has been trapped into caring for his "emotionally disturbed" sister, Bam-Bam, just sprung from "the nuthouse" and played magically and hilariously by Catherine O'Hara, the brilliant "SCTV" alumna who was a funny pretty woman long before Tina Fey or Kristen Wiig of "Saturday Night Live."

Now, of course, when Larry says "if there's anything I can do," a phrase that one need not even carry through to completion (although "If there's anything I can do, please don't hesitate to ask" is fairly common), he doesn't mean it. He is just being polite. And so he becomes apoplectic when Funkhouser doesn't hesitate to ask and promptly comes up with something Larry can do. Larry excoriates his friend for failing to grasp the reality of the phrase, and the friend comes back with a maxim that probably qualifies for that select etymology we know as "Words to Live By":

"You can't make an empty gesture to a Funkhouser."

If there's a funnier show on television, let me at it. Which is not to say there isn't, only that it is hard to think of one at the moment. (Maybe the Glenn Beck show, but that's not funny on purpose.) David is TV's reigning king of caustic comedy, at least in sitcom form, and with "Curb," he really invented a hybrid, a sort of reality sitcom, because much of the dialogue is improvised by the actors after they grasp the scene parameters and episode storyline that David comes up with. Each year he perfects it further; eventually it will blow up or melt down. And then watch out, brother!

When we last left Larry -- reluctantly, but then again, not that reluctantly -- he had finally triumphed. The beautiful Loretta (the beautiful Vivica A. Fox) had moved into his house with a few of her family members and taken over the half of Larry's bed formerly occupied by wife Cheryl, played by Cheryl Hines. As any regular fan could have predicted, Larry wants Cheryl back (unlike the real-life Larry, who is divorced from his real wife, Laurie) and so the first two episodes concern Larry's efforts to oust Loretta.

Why would he want to eject such a gorgeous woman from his life and home? Because she has cancer. Gasp!!! Herewith a warning to sensitive viewers, or maybe just sensible ones: Many of the laughs this season come at the expense of cancer. The disease itself is never found to be in the least bit funny, but Larry's clumsy, tactless interactions with cancer patients are in the most bit funny. To say the least. Watch his face crinkle and crumble as a doctor describes the life of a cancer patient's caregiver; it is a role that calls for far more dedication and selflessness than Larry could ever muster, even on his best day and even if there were 10 of him.

And so the joke is really on Larry -- on the man too wrapped up in his idiosyncratic and mollycoddled existence ever to dedicate himself fully to another human being. That even goes for Cheryl, who explains the main reason she sought refuge from Larry. It was because he didn't have a job and spent too much time at home, and hence for her, there was too much Larry in her life.

But when he was working on "Seinfeld," he was at the studio until all hours, or on the golf course, and "that was the right amount of Larry" in her life, she explains, without offending him at all. He knows himself. He can understand. His curse in life is really that he has to spend every waking, and sleeping, moment with Larry, but he makes up for that by asserting himself at every opportunity, even the most trifling and ridiculous ones.

It is good to see the "Seinfeld" kids together again, although Michael Richards soiled his reputation badly after the show's run by uttering a racist insult from the stage of an L.A. comedy club. This is hard to forget or overlook, but at least his presence is minimized, in Episode 3, anyway. There are certainly no pratfalls (at least not yet) nor burstings through the door.

Jason Alexander looks larger, Julia Louis-Dreyfus (the only cast member to have gone on to another hit series) looks taller somehow, and Seinfeld himself seems to have terminal 5 o'clock shadow. But as mythic iconic quartets go, they are a sort of modern-day equivalent to Dorothy and her three friends from "The Wizard of Oz." Remember, I said "sort of"; you can get away with almost anything if you stick a "sort of" near it.

Obviously, watching three new episodes of "Curb Your Enthusiasm" at one sitting can skew one's perceptions, which is what happened to your obedient critic. Even so, sitting down to a new batch of "Curbs" is always an occasion filled with rueful anticipation. You know you will laugh, but you know you will cringe. You know you will guffaw, but you'll also likely wince. It's hard to imagine comedy that's any edgier, without being topical, than this.

Larry "Curb Your Enthusiasm" David is the best thing to happen to TV comedy since Larry "Seinfeld" David -- and now, in a strange combination of Pirandello and Kafka and Buster Keaton -- they will occupy the same time and space in the temporal universe. It's as terrifying as it is funny -- well, sort of.
Posted by Robalini at Friday, September 25, 2009