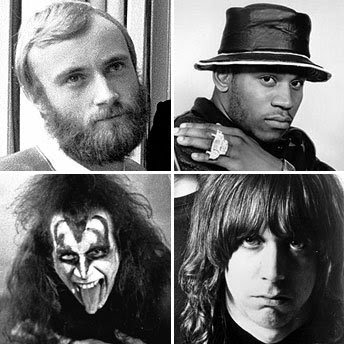 The ballot for next year’s Rock and Roll Hall of Fame class is one of the most diverse ever: the Red Hot Chili Peppers, LL Cool J, Kiss and Genesis are up for nomination alongside the Stooges, Donna Summer, ABBA, Darlene Love, Laura Nyro, the Chantels, the Hollies and Jimmy Cliff. Artists are eligible for induction 25 years after their debut release, so all the candidates released their first single no later than 1984. LL Cool J and the Red Hot Chili Peppers both made the ballot on their first year of eligibility.

Check out the potential Rock Hall Class of 2010 in classic photos.

This is Kiss’ first time on the ballot, and their wait for a nod has frustrated the band and its army of fans. “There are disco bands, rap bands, Yiddish folk song bands in the Rock and Roll Hall of Fame, but not Kiss,” Gene Simmons said last year. “I believe we have more gold records in America than any other group, but it’s OK.” The Stooges made an appearance at the induction ceremony just two years ago, as Iggy Pop and Co. performed a pair of Madonna songs when the Queen of Pop joined the Hall.

If LL Cool J gets inducted he will be the third hip-hop act to get into the Hall, after Grandmaster Flash & The Furious Five (Class of ‘07) and Run-DMC (Clas of ‘08). “I don’t even think I can describe it. In terms of music, it’s probably the happiest moment for me since I got my break,” LL Cool J tells Rolling Stone. “My break was the moment I was called by Rick Rubin and he said, ‘Come down, let’s make some records.’ Now they are nominating me for the Rock and Roll Hall of Fame, it makes me feel like it mattered a little bit. It’s cool. It’s a great feeling.” Watch LL Cool J react to his Rock Hall nomination here.

The final list of inductees — decided by the 500 voters receiving ballots — will be announced in January and the ceremony will once again be held at New York’s Waldorf Astoria on March 15th, 2010. On October 29th and 30th the Rock and Roll Hall of Fame will celebrate its 25th anniversary with two concerts at Madison Square Garden that will feature performances by U2, Bruce Springsteen and the E Street Band, Metallica, Simon & Garfunkel and many more.
Posted by Robalini at Friday, September 25, 2009