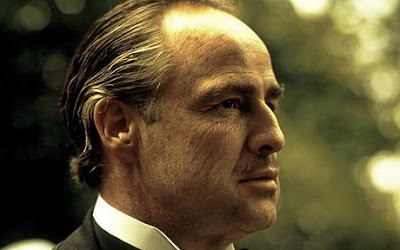 The Godfather - memorable lines
The expression 'make him an offer he can't refuse' has passed into movie legend, voted the second most memorable line in cinema history in the American Film Institute's list of the top 100 Movie Quotes.
22 Sep 2009

The line occurs three times in The Godfather, each time in reference to the career of nightclub crooner Johnny Fontane, Vito Corleone's godson.

Corleone uses intimidation (the offers which can't be refused) to further Fontane's career on four separate occasions. On the first, which is referred to retrospectively in the film, he buys out a contract with a band leader that Fontane is locked into. He then ensures that Fontane wins a part in a war film (the producer finds the severed head of a horse in his bed), later helping him to win an Oscar for the role. Finally, Corleone lends Fontane money to set up a film studio.

The quotes in full:

Michael: Fredo, who are the girls?

Fredo: That's for you to find out.

Michael: Get rid of them, Fredo.

Michael: I'm here on business I leave tomorrow now get rid of them. Come on, I'm tired. Get rid of the band, too.

[Fredo chases everyone out of the room]

Michael: What happened to Moe Greene?

Fredo: He had business. He said give him a call. Once the party started.

Michael: Well, give him a call. Hello, Johnny.

Johnny Fontane: Mike, it's nice to see you again.

Michael: We're all proud of you. Sit down, Johnny, I want to talk to you. The Don's proud of you, too.

Johnny Fontane: Well, I owe it all to him.

Michael: He knows how grateful you are. That's why he'd like to ask a favor.

Johnny Fontane: Mike, what can I do?

Michael: The Corleone family is thinking of giving up all of its interest in the olive oil business, settling out here. Now Moe Greene will sell us his share of the hotel and the casino so that it can be completely owned by the family. Tom.

Fredo: Hey, Mike, are you sure about that? I mean, Moe, loves the business. He never said anything to me about sellin'.

Michael: I'll make him an offer he can't refuse. You see, Johnny, we feel that entertainment is going to be a big factor in drawing gamblers into the casinos. We're hoping that you'll sign a contract agreeing to appear 5 times a year. Perhaps convince some of your friends in the movies to do the same. We're counting on you, Johnny.

Johnny Fontane: Sure, Mike, I'll do anything for my Godfather. You know that.

Michael: How are you, Moe?

Moe Greene: You got everything you need? The chef cooked for you special, the dancers will kick your tongue out and your credit is good. Draw chips for everyone in the room so they can play on the house.

Michael: Sure, you want to meet him?

Michael: My father helped him with his career.

Kay Adams: How did he do that?

Michael: ...Let's listen to the song.

Kay Adams: [after listening to Johnny for a while] Tell me, Michael. Please.

Michael: Well, when Johnny was first starting out, he was signed to a personal services contract with this big-band leader. And as his career got better and better, he wanted to get out of it. But the band leader wouldn't let him. Now, Johnny is my father's godson. So my father went to see this bandleader and offered him $10,000 to let Johnny go, but the bandleader said no. So the next day, my father went back, only this time with Luca Brasi. Within an hour, he had a signed release for a certified check of $1000.

Kay Adams: How did he do that?

Michael: My father made him an offer he couldn't refuse.

Kay Adams: What was that?

Michael: Luca Brasi held a gun to his head, and my father assured him that either his brains or his signature would be on the contract.

Michael: That's my family Kay, that's not me.

Johnny Fontane: [discussing his problems] I don't know what to do, Godfather. My voice is weak, it's weak. Anyway, if I had this part in the picture, it puts me right back on top, you know. But this... this man out there. He won't give it to me, the head of the studio.

Don Corleone: Woltz. He said there's no chance, no chance...

[All of a sudden, Don Corleone rises from his chair and gives Fontane a savage shake]

[gives a quick slap to Fontane]

Don Corleone: What's the matter with you? Is this what you've become, a Hollywood finocchio who cries like a woman? "Oh, what do I do? What do I do?" What is that nonsense? Ridiculous!

[the Don's unexpected mimicry makes Hagen and even Fontane laugh; around this time Sonny comes in]

Don Corleone: Tell me, do you spend time with your family?

Johnny Fontane: Sure I do.

Don Corleone: Good. Because a man who doesn't spend time with his family can never be a real man.

[gives a quick look at Sonny and affectionately embraces Fontane]

Don Corleone: You look terrible. I want you to eat, I want you to rest well. And a month from now this Hollywood big shot's gonna give you what you want.

Johnny Fontane: Too late. They start shooting in a week.

Don Corleone: I'm gonna make him an offer he won't refuse. Okay? I want you to leave it all to me. Go on, go back to the party.

Email ThisBlogThis!Share to TwitterShare to FacebookShare to Pinterest
Labels: The Godfather