Jedi tossed out of supermarket for wearing hood 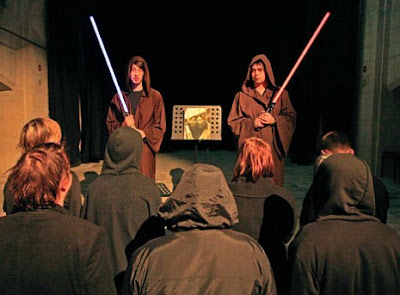 Jedi tossed out of supermarket for wearing hood
09.19.2009
Richard Metzger

Bless his pointed little head, Daniel Jones, aka Master Morda Hehol, creator of the International Church of Jediism (UK Church of the Jedi, who claim 500,000 members worldwide) along with his brother Barney Jones, aka Master Jonba Hehol, claims he was treated with prejudice and ridiculed over his religion by staff at a Tesco super-market in Bangor, North Wales.

His religion. The Church of Jediism, requires adherents to the faith to cover their heads with their hoods—or hoodies—in public places. Master Morda Hehol was removed from the store by security for his refusal to compromise his Jedi beliefs:

I told them it was a requirement of my religion but they just sniggered and ordered me to leave. I walked past a Muslim lady in a veil. Surely the same rules should apply to everyone. It was discrimination. I was really upset. Nobody should be treated like that. I’ll advise worshipers to boycott Tesco if it happens again. They will feel the Force.

Jedi are very welcome to shop in our stores although we would ask them to remove their hoods. Obi-Wan Kenobi, Yoda and Luke Skywalker all went hoodless without going to the Dark Side. If Jedi walk around our stores with their hoods on, they’ll miss lots of special offers.

Thanks Steve Mills!
Posted by Robalini at Wednesday, September 23, 2009