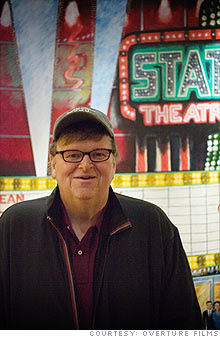 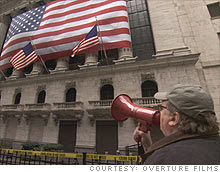 Michael Moore: 'Capitalism is anti-Jesus'
In a Fortune interview, the flame-throwing director explains why his new film brings his religion into the picture for the first time.
By Scott Cendrowski, reporter
September 23, 2009

NEW YORK (Fortune) -- The title of Michael Moore's latest film, "Capitalism: A Love Story," may be ironic, but there's nothing subtle about the message, right from the opening scenes.

The two-hour documentary begins with footage of a family being evicted from their foreclosed home by a half dozen police officers. Then he presents more incriminating evidence: a bankrupt Chicago factory where workers are denied pay, a privately run juvenile prison that paid off judges to give convicts longer sentences, and last year's $700 billion bailout of the banking system.

Moore, 55, ends with this conclusion: "Capitalism is an evil and you can't regulate evil. You have to replace it with something that is good for everyone."

The writer-director-partisan, who rose to prominence after his 1989 takedown of GM in the documentary "Roger & Me" and his mainstream hit "Fahrenheit 9/11" in 2004, spoke with Fortune on the eve of his film's Wednesday opening in New York City and Los Angeles (it opens nationwide on Oct. 2).

Moore talked about how his Catholic upbringing influenced the film, why Corporate America still irks him, and how to fix his economically troubled home state of Michigan. Excerpts:

You've said you started filming "Capitalism: A Love story" a year and a half ago. Did the film change after Lehman went bankrupt and the stock market crashed?

I've thought about this for 20 years. Ever since "Roger and Me," I've felt the problem here is an economic system that is unjust and unfair. It's not democratic. And I keep making these films but I dance around the subject: it's General Motors here, the health-care industry there, and I started thinking, "Why don't I just name it?"

[The wealthiest Americans] proved that the free market is something they really don't believe in, they don't believe in competition, they actually do believe in socialism, that we the people should use our tax dollars to keep them in their mansions and their yachts.

I think they exposed themselves to a lot of middle class people who did believe in their system and they showed everybody the Ponzi scheme that it is. It's set up like a pyramid, so that the richest 1% at the top have more financial wealth than the 95% beneath them.

But the trick here is to get the 95% believing that if they work hard and slave away, they would get to the top of the pyramid. Of course, as we know, only a few people can stand on top of a pyramid. The fact that this crash exposed our economic system as a corrupt scam was something I didn't intend on happening while I was making the movie.

How is this film different from your previous ones?

I talk about my religion, which I have never talked about. I think religion should be a private matter. But I thought it was important to this discussion. I'm not a proselytizer, but I do have very strong beliefs and these beliefs were formed not in the school of Karl Marx, but in the Catholic Church. Priests and nuns taught me these lessons of how we're to treat each other, how we're to treat the poor, and how we're to divide up the pie.

I'm one of the few people on the left who's been fortunate to have access to a mainstream audience. I'm always thinking about ways to communicate with them and stay true to myself, because I am them, and I come from Middle America. I have very conservative values that go contrary to the fictional character that's been created of me by Bill O'Reilly, Rush Limbaugh, and the Fox News Channel. I've been with the same woman for 30 years, I don't invest my money in anything but a savings account.

Has your view of corporate America changed since your first film, "Roger & Me," opened in 1989?

I've become all the more agitated, especially with what I've seen and with having a peak behind the curtain. Having the life I do, working in an industry that's owned by major corporations. [Moore's film is distributed by a unit of Liberty Media, whose CEO John Malone is a formidable capitalist.]

Just a couple weeks ago, the film was going to debut in the Toronto Film Festival in the Elgin Theatre. Visa sponsors the theater, so during the festival it's called the Visa Screening Room. So they had [the film studio] call me to ask, Is there any reference against Visa in the movie? And this is while they're still deciding whether to put the movie in the festival.

Are there any good things happening in American business?

I see very little support for the things we really need to be investing in. Where's the cure for cancer? Where's the bullet train to take us from New York to L.A. in 10 hours? Where are the alternative energy systems to save us when we run out of oil?

I wish these were the priorities. But when Wall Street sucks up our best mathematicians, physicists, engineers, when they should be working on these other things and instead they're working to create derivatives ... c'mon. We're in deep, deep trouble. We need the best minds working on these things.

You live in Michigan, where you were born and raised. How can Detroit be saved?

It revolves around good-paying jobs. We've allowed the middle class to be decimated over the last 30 years. We've allowed our industrial infrastructure to collapse. So instead of initially giving bailout money to a General Motors that was never going to change or to banks so they can cover losses from crazy betting schemes, this money should be going to helping to create jobs in places like Detroit. People need to work. There are so many things we need to build and create for the 21st century.

I would do what my friend Dan Kildee is doing in Flint, Michigan. He's the county treasurer and he's taken over 9,000 homes that have been abandoned. He's tearing them down and his idea essentially shrank the city in physical size. They restored neighborhoods by building parks, fields and woods.

You tried to get Hank Paulson on the phone in the film, but weren't successful. If you got him on the phone today, what would you ask?

If I had a chance to talk to him, I'd want him to come clean and tell me the truth about how he rigged this whole thing. Tell us what happened because we don't know the details. How did so many Goldman people end up in the administration? How is it that Goldman's chief competitors are left to die -- not bailing out Lehman Bros., Bear Stearns falls apart, Merrill Lynch is absorbed into Bank of America -- and look who's left standing: the company that's got all their boys inside the administration.

If capitalism is evil, what's the solution?

Some people say to me, democracy is not an economic system, it's a political system. My answer to that is, you think capitalism has nothing to do with politics?