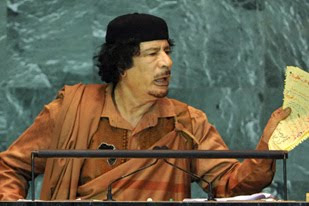 Libya's president has attacked the permanent members of the United Nations' Security Council during his first ever address to the UN General Assembly.

In a one-and-a-half hour speech in New York on Wednesday, Muammar Gaddafi said the veto-wielding nations of the Security Council were ignoring the views of the full 192 members of the General Assembly and the principles of the UN charter.

"The preamble [of the charter] says all nations are equal whether they are small or big," Gaddafi said in his address.

But he accused the permanent members of the council of undermining other states.

"The veto [held by the five permanent UN members] is against the charter, we do not accept it and we do not acknowledge it," Gaddafi said.

"Veto power should be annulled."

In a speech that far exceeded the 15-minute slot he was allocated, the Libyan leader read aloud sections from a paperback copy of the UN charter, before throwing it over his shoulder on several occasions.

"I think the Libyans deserve much better than this. It is a disaster for Arab world opinion. Tearing up the UN Charter is shocking, but this should have been expected from the beginning"

"The Security Council did not provide us with security but with terror and sanctions," he said.

He said the council, comprising the United States, Britain, France, Russia and China, had failed to prevent or intervene in 65 wars that have taken place since the United Nations was established in 1948.

He called for $7.77 trillion in compensation to be paid to Africa from its past colonial masters, and one point questioned the assassination of US President John F Kennedy.

"The assassination of Kennedy in 1963 - we want to know, who killed him? Lee Harvey? Why was Harvey killed?" he said, referring to the man who was arrested in connection with Kennedy's murder and shot dead while being transferred between jails.

Mohamed Ben-Madani, editor of the Maghreb Review, told Al Jazeera's that Gaddafi's speech was a "disaster" for the African Union and Arab and Muslim delegations at the UN General Assembly.

"I think the Libyans deserve much better than this. It is a disaster for Arab world opinion. Tearing up the UN Charter is shocking, but this should have been expected from the beginning," he said.

The five permanent members should lose their veto, or the UN should expand the council with additional member states, Gaddafi also said.

"It should not be called the Security Council, it should be called the 'terror council'," he said, adding that the permanent members treat smaller countries as "second class [and] despised" nations.

"Now, brothers, there is no respect for the United Nations, no regard for the General Assembly," he said.

As Gaddafi spoke, the US senate approved a resolution condemning the "lavish" welcome-home ceremony that Libya gave last month for Abdel Basset al-Megrahi, who was convicted of the bombing over a US passenger aircraft over the Scottish town of Lockerbie in 1989.

The US senate demanded that Tripoli apologise for the celebration, which came after Scotland's justice minister released al-Megrahi, a former agent, on compassionate grounds.

Libya has a temporary seat on the Security Council until the end of 2010.