Fishing and gardening in your living room? 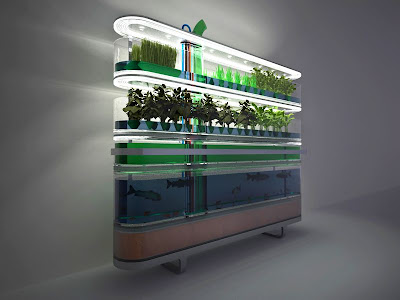 Fishing and gardening in your living room? Welcome to the future of farming
Sep 22 2009
Alexandra Le Tellier

Finding ways to grow edible gardens in our limited urban landscape has inspired a flurry of creative solutions among green-thumbed pros and apartment-bound rookies alike. With chefs growing produce on rooftop gardens, Santa Monica homeowners creating "share gardens" with their neighbors and Del Rey dwellers planting in patches of soil in the alleys behind their homes, it seems everyone is drinking the fresh veggie Kool-Aid. But it's the folks at Philips Design who are really pushing boundaries with a three-concept Food project, which they predict will change the way we consume and source food 15 to 20 years from now.

The first component of the project is the "diagnostic kitchen," a nutrition monitoring system with a "swallowable sensor" that tracks food intake for the purpose of digestive health. It also has a scan wand for gathering nutritional content, thereby suggesting what the individual should eat. Part 2 is "food creation," which pushes the principles of molecular gastronomy, the process of deconstructing food and reassembling it in new forms via man-made chemical compounds, such as freezing alcohol with liquid nitrogen. It includes a "food printer," which would allow people to tailor food forms based on their individual needs.

But it's the third part of the concept, "home farming," that knocks the Food project out of the park, to a dimension that not even the creators of "The Jetsons" could have dreamed up. Behold a solar-powered, self-sufficient biosphere that stacks interdependent mini-ecosystems on top of each other to create a holistic food chain, reduce the impact on the environment and also potentially feed an entire apartment complex full of people. Talk about a modern share garden.

"Looking into the economics and politics of rising food prices and theories and impending food shortages led us to create the 'food farm' to test people's sensitivity to the issue," says Clive van Heerden, senior director of design-led innovation at Philips Design. "We wanted to develop something initially that would supplement the nutritional needs of a family living in a high-rise accommodation, without drawing electricity or gas."

How it works, based on a video demonstration:

The tube running through the appliance acts as the central nervous system, connecting the ecosystems.

It captures and channels natural light and operates as a light at night.

Water and nutrients are cycled through the system.

Shrimp help purify the water, while fish fertilize the plants.

Methane is used to create power and carbon dioxide.

CO2 is captured and used to feed the edible plants.

Plants give oxygen, which in turn is given to the fish.

Excess oxygen is dispersed into the atmosphere.

Ecosystem layers slide up and down for access to the food.
Posted by Robalini at Wednesday, September 30, 2009

Email ThisBlogThis!Share to TwitterShare to FacebookShare to Pinterest
Labels: Farming