Megan Fox Admits To Cutting Herself As A Child 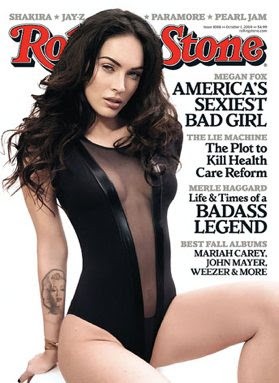 Megan Fox Admits To Cutting Herself As A Child In Rolling Stone: Cover Story
9-16-9
By Elizabeth Lancaster

Megan Fox is known world wide for not only her intense attractiveness but her shocking commentary on herself, other talent, and the world of Hollywood. Megan, at the young age of 23 already has quite a story to tell, and she's continuing to do so, this time in Rolling Stone.

Already coming at number 1 this year on FHM’s list of the 100 sexiest women, Megan is someone known exclusively for her beautiful face, and nearly perfect body. Another actress that provokes similar media and public attention for the same reasons is Angelina Jolie, an actress that Megan admits she shares some similarities with, but does not want to discuss because "If I did talk about it, I’d be taking on a role-model status, and I’d have to choose my words very carefully, and I’d have to make sure I reveal it in a specific way, and I don’t want to do it," she says. Ironically, in this same interview, she admits to cutting herself as a child, which is yet another fact she shares in common with Angelina.

In an attempt “to deflect attention from my reality” the young star went on to mention some qualities that she actually shares with her onscreen character from her upcoming film "Jennifer’s Body." Megan’s character is a demon possessed cheerleader that spends her time seducing and then devouring high school boys and sharing a highly publicized kiss with Amanda Seyfried. Similarly to her character, Megan mentions her hot temper in real life, and how although she might not attempt to eat her seemingly on-again beau Brian Austin Green, she has threatened to, er, kill him. "I’ve had to say to Brian, ‘You have to go and stop talking to me, because I’m going to kill you. I’m going to stab you with something. Please leave,'" Megan recalled. "I’d never own a gun for that reason. I wouldn’t shoot to kill. But I would shoot him in the leg, for sure."

Some might wonder how she puts on the charm to have kept Brian even through these fits of rage. Megan explains women are in charge as long as they are “completely in charge of [their] sexuality.”
Posted by Robalini at Sunday, September 20, 2009