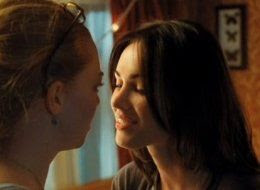 Megan Fox may feel safer kissing girls, but Amanda Seyfried, her onscreen make out partner in 'Jennifer's Body,' assures us their sapphic scene is just a gimmick.

"We knew that it was going to play a really big role in publicizing the movie," Seyfried told WENN. "We kind of rolled our eyes at the idea of having to make out."

Not so!, said the film's screenwriter, 'Juno' scribe Diablo Cody. "If the two protagonists of the film were a guy and a girl and in a particularly tense moment, they shared a kiss, no one would say it was gratuitous. But the fact that they're women means it's some kind of stunt. It was intended to be something profound and meaningful," she told The Frisky.
Posted by Robalini at Wednesday, September 23, 2009

thanks for the information on this blog! I find it very interesting and entertaining! hopefully soon have updates that I love your post! I thank you too!
buy viagra
viagra online
generic viagra