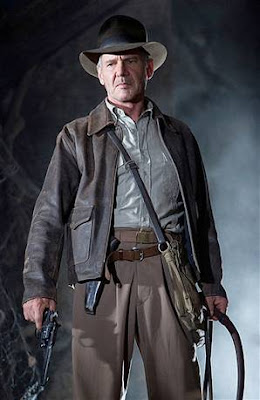 Dust off the fedora and clear out the snakes — Indiana Jones is ready to ride again.

Harrison Ford, 67, says he's already ready for the globe-trotting archaeologist's next adventure, only a year after one of history's most successful film franchises was revived — and that the next chapter is already well on its way.

"The story for the new 'Indiana Jones' is in the process of taking form," Ford told France's Le Figaro. "Steven Spielberg, George Lucas and myself are agreed on what the fifth adventure will concern, and George is actively at work. If the script is good, I'll be very happy to put the costume on again."

The screen legend was on hand to accept a career honor at the Deauville Film Festival, with partner Calista Flockhart on his arm.

But until it's again time to fight Nazis and Stalinists and overcome the supernatural, Ford says he's happy to be a simple househusband.

"I do the dishes. And I make dinner," he said. "In the mornings, I get my 8-year-old son Liam ready for school, and then I pass my time flying around in my planes. You see, I'm just like anybody else. My children are between 8 and 42, and I'm also a grandfather."

Though he's got "Indy" in the works and two films ("Morning Glory" and "The Crowley Project") set for release next year, Ford says there's one stereotypical actor's ambition he's happy to leave alone.

"[Directing]'s too hard, too long, and it doesn't pay enough!" he joked. "To be a good filmmaker is the hardest job in the world. I'm not patient enough. And I don't want to be the boss."
Posted by Robalini at Friday, September 18, 2009

The good vibe for everybody.
Problems of health blogging me at home (for the moment) I take of come here, participate a little good grow has all !